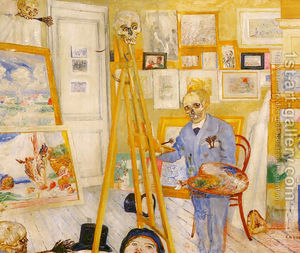 ...not quite what we meant.

The vast majority of shows that mention painting mention this trope at one point: Artists are never recognized until after they're dead. Though this has happened in a great majority of cases, there have also been been a great deal of painters, modern and classic, that have been recognized while still alive. Nor has the deceased been recognized immediately after his corpse hits the ground, as it seems to happen when this trope is in effect. (Historically, this has affected composers and writers far less than people assume. Shakespeare was successful during his lifetime, so was Beethoven. It stands to reason - only a few people would continue doing something for a long time without some kind of success. This is glaringly obvious for composers - of the top tier, only Bach comes even remotely close to this trope, though he was a well-respected musician in his lifetime.)

In 99% of the cases where this trope is mentioned, one character, either the artist or an associate, will come up with the "brilliant" idea of spreading rumors of the artist's death, which immediately causes said artist's work to magically get the recognition that eluded it all these years. Of course, something inevitably goes wrong, the artist is found to be alive, and the status quo is restored. For some reason, fraud accusations are seldom made.

See also Vindicated by History, True Art Is Ancient. When a musician's death or departure leads to their group doing better than before, it's an aversion of The Band Minus the Face.