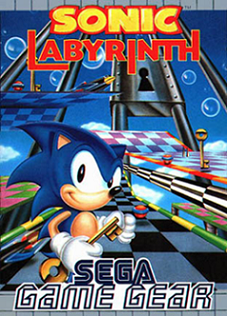 Released in November 1995, Sonic Labyrinth is the eleventh title in the Sonic the Hedgehog series released on the Sega Game Gear.

One day, Dr. Eggman had an epiphany: if Sonic's speed was removed from him, taking over the world would be like taking candy from a baby. So, later that night, Eggman snuck into Sonic's house and, rather than just kill him in his moment of weakness, replaced Sonic's sneakers with a pair of supposedly-identical-looking Speed Down Boots. Next morning, Sonic woke up, slipped on the shoes and found out that he couldn't run or even jump. Eggman made himself known and gloated that the Boots can only be removed by Chaos Emerald energy. He also claimed that the miracle gems are all hidden in the Great Labyrinth, his latest base. So, in a nutshell: Eggman took Sonic's speed; Sonic must go through a dungeon to get it back.

As far as gameplay is concerned, the best way to describe it is: Marble Madness with Sonic as the playable character. Sonic can't run or jump, only walk and your only means of fast locomotion and offense is the Spin Dash. There are four "worlds" in the Great Labyrinth: Labyrinth in the Sky, Sea, Factory and Castle, and they each have three acts and a boss battle. The main objective in each main act is to collect three keys and make it to the goal in three minutes. Get hit, and you lose time and the keys fly out of you; don't grab the keys in time and they'll pop right back in their original spots. Fall down a pit or right out of time, and you die. With boss battles, rather than collecting keys, you must first go down a chute and collect rings on the way down. Once you reach the end, you'll actually fight the boss. Get hit once, and you lose all of your rings - even if you manage to get 99 rings in the tube - get hit again, you lose a life. If you lose all of your lives, you must start from the beginning of the game.

Tropes used in Sonic Labyrinth include:
Retrieved from "https://allthetropes.org/w/index.php?title=Sonic_Labyrinth&oldid=986840"
Categories:
Cookies help us deliver our services. By using our services, you agree to our use of cookies.