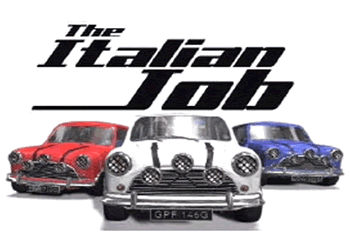 Get your skates on, mate

A 1969 film starring Michael Caine, involving him being let out of prison and gathering a gang of bank robbers together to rob a van full of gold. Involves one of the best car chases in cinema (with Mini Coopers) and one of the most famous lines in cinema, when someone uses slightly too much explosive on a van during a test.

A highly popular British film and often repeated on TV. Years later an episode of MacGyver, "Thief of Budapest", lifted most of the film's iconic car chase, using creative editing to transpose it from Turin to Hungary!

Tropes used in The Italian Job (1969 film) include:
Retrieved from "https://allthetropes.org/w/index.php?title=The_Italian_Job_(1969_film)&oldid=1833518"
Categories:
Cookies help us deliver our services. By using our services, you agree to our use of cookies.