Everything About Fiction You Never Wanted to Know.
(Redirected from No Kill Like Overkill)
Jump to navigation Jump to search 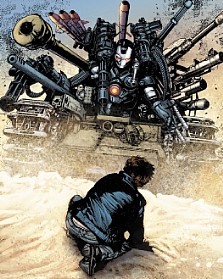 ...but it's always, always worth it. Always. Especially if the enemy is just hanging on up until the end. Actually, that's just cruel.

Often part of a Humiliation Conga, if said conga ends with the villain's death. If not then it will often happen to the nameless Mook or other poor minion who happens to be in the hero's (generally the Anti-Hero)'s way. If you're feeling lampshadish, another character may remark "I think he's dead already" near the end of it.

If done right, you'll probably have the pleasure of saying No One Could Survive That without having to doubt. Or.... maybe not. Can sometimes result in a Cruel and Unusual Death. Every so often, it will actually worsen the situation by crossing the Godzilla Threshold.

Contrast Cherry Tapping, Once Is Not Enough.

Examples of There Is No Kill Like Overkill are listed on these subpages:

Retrieved from "https://allthetropes.org/w/index.php?title=There_Is_No_Kill_Like_Overkill&oldid=1921339"
Categories:
Cookies help us deliver our services. By using our services, you agree to our use of cookies.