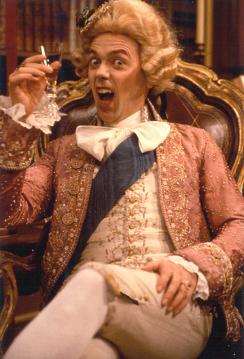 The Ditz with a trust fund. The Upper Class Twit is either an aristocrat or a relative of someone in the upper echelons of society, and is automatically provided with all of his living expenses. In other words, he was a Spoiled Brat as a child, and now he has no reason to contribute to society, which is just as well, since he doesn't have the skills to contribute anyway. More often than not, he leads a hedonistic lifestyle that embarrasses his family. Highly prone to Conspicuous Consumption.

Usually used as a foil for The Jeeves or some other more intelligent character. The male Upper Class Twit is often a prime target for Gold Diggers.

A popular recent subtype, and the female counterpart to the usually male Upper Class Twit, is the Airhead Heiress - a young, brainless, fashion slave party girl heiress. Any resemblance to Paris Hilton in recent works is purely intentional coincidental.

Of course, sometimes they're Obfuscating Stupidity, and they may even be up to something far more interesting after hours. See also The White Prince for a royal version.

Interestingly there is a heroic variation called Stiff Upper Lip in which a character acts like an Upper Class Twit in stressful situations to display composure and provide a sort of Badass Boast. The difference is that an Upper Class Twit is annoying though sometimes forgivable in a character you otherwise like, whereas a Stiff Upper Lip has the potential to make a CMOA. The same character can be both, of course.

Compare Valley Girl (who doesn't have to be rich, among other differences), Rich in Dollars, Poor In Sense, Nouveau Riche (who starts out poor and strikes it rich, and is crass about it).

The opposite side of the same coin is the Upper Class Wit, who is very clever but terminally lazy.

Examples of Upper Class Twit include:

Retrieved from "https://allthetropes.org/w/index.php?title=Upper_Class_Twit&oldid=1964130"
Categories:
Cookies help us deliver our services. By using our services, you agree to our use of cookies.