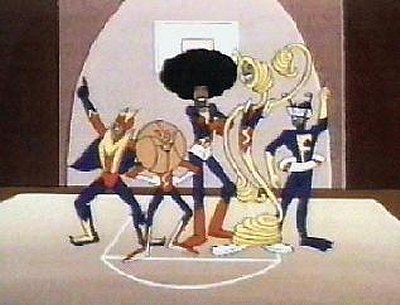 The Super Globetrotters is a 1979 spinoff of The Harlem Globetrotters, produced by Hanna-Barbera for NBC. It ran for 13 episodes. It's five semi-real-life basketball entertainers who gain super powers. Ludicrous super powers. Nate Branch turns into water, Curly Neal retracts his limbs into his body and becomes a basketball, Twiggy Sanders can use his body as a rope, Sweet Lou Dunbar stores gadgets in his immense afro, and Geese Ausbie can duplicate himself. They fight villains, mostly by challenging them to basketball games.

Some of the powers and costumes were taken directly from Hanna-Barbera's The Impossibles.

The whole show is parodied in a Futurama movie.

Tropes used in The Super Globetrotters include:
Retrieved from "https://allthetropes.org/w/index.php?title=The_Super_Globetrotters&oldid=1617341"
Categories: