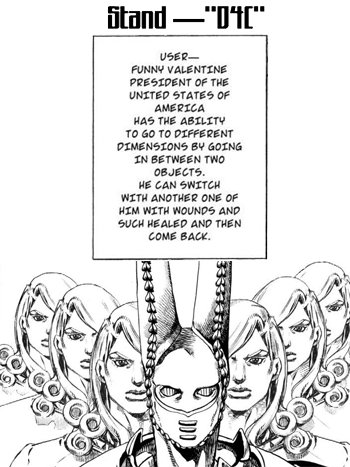 As long as D4C (center) exists, it can create infinite copies of its master.

Through Magic or super-technology, the main character decides to get a large number of chores done via copying himself. Expect the original to choose all of the fun things to do when assigning chores around. Hilarity Ensues when the copies rebel or degrade, which results in either (1) at least one Evil Twin, or (2) copies continually being made to the point of risking exposing the Masquerade, or at least ruining the main character's reputation.

These copies rarely count as persons in and of themselves. See Cloning Blues. If they are counted as people, expect Which Me?.

Compare with Doppelganger Spin, Sorcerer's Apprentice Plot. Not to be confused with I Am Legion. May be used in a Doppelganger Attack. See also Literal Split Personality.

Examples of Me's a Crowd include:

Retrieved from "https://allthetropes.org/w/index.php?title=Me%27s_a_Crowd&oldid=1812936"
Categories:
Cookies help us deliver our services. By using our services, you agree to our use of cookies.