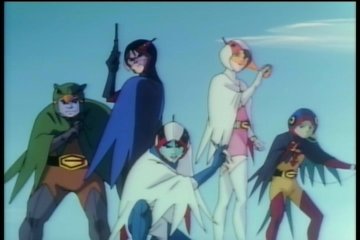 The Five-Man Band is a group of characters whose members fall into archetypes which all complement one another. They are a very specific team with skills that contribute to the group in a unique way.

Note: Variations occur where the core five are different or overlap. Don't take the title too literally—it's the roles more than the numbers that matter.

Contrast with the Five-Bad Band. The Psycho Rangers are the collective Evil Counterpart of a given Five-Man Band.

This can sometimes literally be a musical group. Characters can also be divided by personality instead of function: See Four-Temperament Ensemble.

The subpages list examples of teams that fit at least four of the character tropes. Remember that they form a team dynamic; it's always tempting to match two of the characters in a show, then try to convince yourself and others that the other characters can be squeezed/wedged/stuffed into the description of the other character types, but that's not the point of the Five-Man Band trope. The individual character types exist outside of the band. The Five-Man Band only occurs when the team as a whole fits, not just a few characters.

The following 51 pages are in this category, out of 51 total.

The following 9 files are in this category, out of 9 total.

Retrieved from "https://allthetropes.org/w/index.php?title=Category:Five-Man_Band&oldid=1898559"
Categories:
Cookies help us deliver our services. By using our services, you agree to our use of cookies.