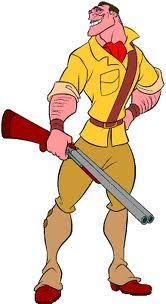 This guy just loves to hunt. He doesn't do it for food, or because his prey is a danger to mankind, not even because It's Personal. He will hunt anything that tickles his fancy and he does it for the thrill and the glory. He is an adventurer and egomaniac.

He doesn't shoot ducks over a pond; his prey has to live far, far away in a most dangerous and uncomfortable location, has to be hard to find, impressive looking, and immensely powerful.

Great cats, large sea creatures, elephants, and crocodiles, as well as birds of prey come to mind. If the author is more fantastically inclined, he can let the Egomaniac Hunter go after dragons, phoenixes, unicorns, you name it. Sometimes, the Egomaniac Hunter even goes after Funny Animals (including the anthropomorphic ones), in a very uncomfortable yet chillingly logical conclusion to What Measure Is a Non-Human?.

This character isn't very likeable in modern renditions. His, and it's almost always a man, usual traits include some of these: selfishness, recklessness, trigger-happyness, racism, bullheadedness, and arrogance. Older works show him in a more favorable light, but often, he's seen as decadent by them, too. Extra points for having a gallery of rare trophies, endangering others in his hunts, gleefully shooting something that everyone knows is the last of its kind just so he can have it mounted and stuffed, or chasing sapient game.

He is usually European or American, but he can have any real or fictional ethnicity.

He provides contrast to reasonable or anviliciously eco-sensitive heroes; he can bring danger on the group, die a funny death, or just be the hero's employer whom he brings along for the ride. This character type also commonly appears in Horror or Adventure films where the antagonist is some kind of huge, dangerous animal or monster.

Because Hunters Are Evil, he will sooner or later break the law to be able to continue with the killing, and become an Evil Poacher, provided of course, he isn't already one.

Subtrope of In Harm's Way.

Examples of Egomaniac Hunter include:

Galaxy Rangers fandom has also referred to him as "a Thundercat on drugs." In a later episode, "Murder on the Andorian Express," he actually helps Doc and Niko take down a Crown assassin, explaining that his whole purpose for getting on the luxury liner in the first place was to hunt the assassin.

Retrieved from "https://allthetropes.org/w/index.php?title=Egomaniac_Hunter&oldid=1846217"
Categories:
Cookies help us deliver our services. By using our services, you agree to our use of cookies.