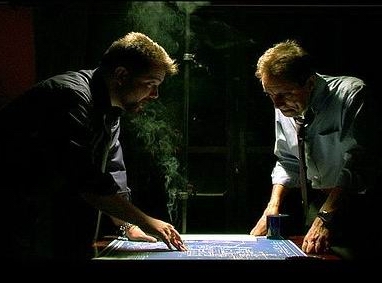 So you've got your Big Bad Evil Overlord, looming over the world like a colossus. But he can't just putz around on his throne or hang out in his gym all day long, waiting for the Big Damn Heroes to show up and kick his butt. And while The Omniscient Council of Vagueness doesn't seem to do much but sit around and wait while spouting off cryptic nonsense, they've got to have some sort of hidden agenda to hide or there isn't much of a point.

So they've got to have a Plan. An evil plan. Otherwise there's not much of a story, is there?

If you are looking for Evil Plan the webcomic try here.

Some popular examples of Evil Plans:

Normally, these are accomplished with Stock Evil Overlord Tactics. Of course, most of the smaller-scope plans can usually be accomplished in a less grandiose fashion.

Can involve a Xanatos Gambit but only if the Evil Plan is arranged so that whatever the heroes do helps the villain in some way. See the trope page for details.

Examples of Evil Plan include:

Retrieved from "https://allthetropes.org/w/index.php?title=Evil_Plan&oldid=1848837"
Categories:
Cookies help us deliver our services. By using our services, you agree to our use of cookies.