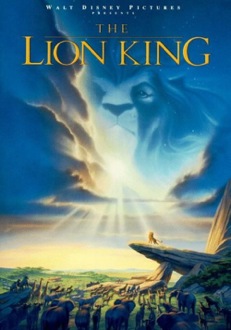 The most financially successful film in the Disney Animated Canon, The Lion King tells the story of Simba, a lion who is heir of the African Pride Lands. After his father, Mufasa, dies, his uncle Scar tells him it's all Simba's fault, ordering him to run away.

Simba subsequently runs away from the Pride Lands, and is found and rescued by Timon and Pumbaa, a meerkat and warthog duo who raise him under the philosophy of "Hakuna Matata" -- "no worries". Many years later, Simba meets an old friend from the past, and realizes that he must return to reclaim his dying kingdom.

A plot described by some as Hamlet and Macbeth with Talking Animals. The sequels seem to follow the Shakespeare trend, as The Lion King II: Simba's Pride is Romeo and Juliet and Macbeth With Talking Animals In Africa and The Lion King 1½ resembles Rosencrantz and Guildenstern Are Dead, a much more recent play and Perspective Flip of Hamlet. Timon and Pumbaa also star in a spin-off animated series, imaginatively named Timon and Pumbaa, which was vastly different in tone and setting from the original movies, doesn't fit into canon, and has a tendency towards almost complete anthropomorphisation.

The video game adaptation for the Genesis and SNES (and others) was very well received, though notoriously hard beyond the first level.

A Screen to Stage Adaptation arrived on Broadway in 1998 and it was an instant smash hit that received much acclaim for its imaginative staging, musical numbers and general awesomeness, by director Julie Taymor.

Now has a re-release in Disney Digital 3D, which has become the first re-release of a movie since the 1997 re-release of Return of the Jedi to hit number one at the box office.

The original film was named to the National Film Registry in 2016.

Tropes used in The Lion King include:

Retrieved from "https://allthetropes.org/w/index.php?title=The_Lion_King&oldid=1922113"
Categories:
Cookies help us deliver our services. By using our services, you agree to our use of cookies.