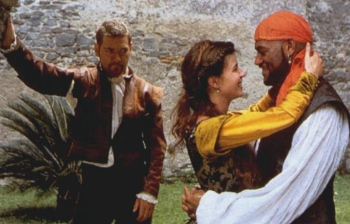 Iago:[1] "O, beware, my lord, of jealousy! It is the green-eyed monster which doth mock The meat it feeds on..."

Envy and jealousy are among the most powerful motivations in both fiction and Real Life. The Bible condemns it in many places, most famously in the Ten Commandments, and it's also one of the Seven Deadly Sins.

Envy is the desire for some object, item, or abstract notion (such as love or power), which can lead to hatred of the possessor(s) of said object. If they cannot secure the object for themselves, the envious party may go so far as to harm or ...eliminate the possessor. If they're egocentric enough, they may even destroy/kill the object. Similar to but distinct from envy is jealousy, which applies much more to relationships. Jealousy is the fear by the possessing party of losing the object. For those in a relationship, this means fear of being supplanted in the object's heart by someone (or even something else). To be precise, envy is the desire for something one does not have whereas jealousy is the fear of losing that something. Both result in similar behaviour.

Envious and jealous characters on the losing side of a Love Triangle will often fall into the trap of assuming things about their competitor - or 'competitor'. Such characters are seldom portrayed positively - most are villains - and as such they tend to assume some rather bad things about their rivals. Expect to see some What Does She See in Him?? on their parts. Furthermore, they may slander their rivals with accusations of unsavoury actions and/or attribute base motives (such as Pride) to their actions. Whether they actually believe there is a fundamental truth to such slander - or have even been manipulated by a third party - plays a big part in determining audience sympathy for them.

This is the motivation behind the bad kind of Dead Person Impersonation. A Genre Savvy character may attempt to exploit this with Operation: Jealousy. See also You're Just Jealous. Feet of Clay or Shrouded in Myth may prove that the envy was unmerited—often to the glee of the envious. On the other hand, a story about the Lonely Rich Kid or some other Sour Grapes Tropes may demonstrate that the envy is wrong because the envied person really suffers more than the person doing the envy (and not because it's wrong to hate people for what they have).

Romantically, may stem from being Love Hungry and lead to a Murder the Hypotenuse—or be sacrificed because I Want My Beloved to Be Happy. Occasionally, it can actually overcome Cannot Spit It Out-- Operation: Jealousy may overtly attempt to engineer this—or lead to a Love Epiphany. A man driven by it will often unreasonably doubt whether a child really is his.

When the trope is not connected to love, but rather based on a character's envy of another's talent or success, they are Driven by Envy. The Lancer (among heroes) and The Starscream (among villains) are particularly prone to the Green-Eyed Monster. The Dark Magical Girl often envies the Magical Girl. Inspiring envy is a defining trait of Always Someone Better, and feeling it, of Clingy Jealous Girl, the Fairest of Them All, and The Resenter. The Yandere is defined by it. The Daddy's Girl, inspired by it, may regard any possible stepmother as a Wicked Stepmother, even if she's truly the sweetest person in the world. Divided We Fall is often motivated by it.

One of Mary Sue's more noticeable traits is that many characters do not suffer from the Green-Eyed Monster about her, regardless of how plausible it is that they would not envy her gifts or be jealous of her romantic success. Either that, or the Mary Sue (specially the of Sympathetic Sue kind) will suffer horrific, mean-spirited attacks inspired by the Green-Eyed Monster, specially if it's from the character who poses the biggest threat to her and her beau's True Love.

Examples of Green-Eyed Monster include:

Retrieved from "https://allthetropes.org/w/index.php?title=Green-Eyed_Monster&oldid=1930341"
Categories:
Cookies help us deliver our services. By using our services, you agree to our use of cookies.