Everything About Fiction You Never Wanted to Know.
Jump to navigation Jump to search
/wiki/A-hacreator 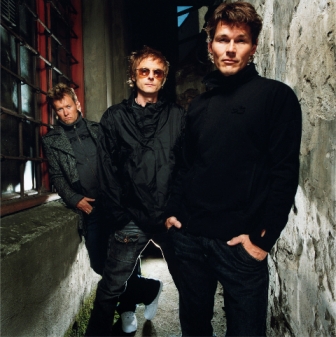 (L-R) Furuholmen, Waaktaar, and Harket: The Power Trio that came from the North

a-ha was a band from Norway, consisting of Morten Harket (vocals), Paul Waaktaar-Savoy (guitars) and Magne "Mags" Furuholmen (keyboards). They initially rose to fame during the 1980s, but have had continued success in the 1990s and 2000s.

a-ha achieved its biggest success with their debut album and single in 1985. Hunting High and Low peaked at number fifteen on the Billboard charts and yielded an international number-one single, "Take on Me", earning the band a Grammy Award nomination as Best New Artist. Hunting High and Low was one of the best-selling albums of 1986.

1987 saw them singing the Theme Tune to the James Bond film The Living Daylights.

In 1994, the band went on a hiatus, the same year a-ha reached a sales number of 20 million albums sold worldwide. After a performance at the Nobel Peace Prize Concert in 1998, the band returned to the studio and recorded 2000's Minor Earth Major Sky, which resulted in a new tour. By 2000, they had reached 36 million albums sold wordwide plus several million singles. In 2002 the band released their seventh studio album Lifelines. Analogue is their eighth studio album and is their most successful studio album in the UK since East of the Sun, West of the Moon and has been certified silver. Their last album is Foot of the Mountain, which was released in June of 2009.

They retired on December 5th, 2010, but reunited in 2015, releasing a new album, going on tour through 2016, then recording an MTV Unplugged special which was followed by an acoustic tour in 2018 to promote yet another album. Their acoustic version of "Take On Me" from the MTV show featured in a key dramatic scene from Deadpool 2 and introduced them to a new generation of listeners.

In November 2012, all three members of the band were appointed Knights of the First Class of the Royal Norwegian Order of St. Olav for their contribution to Norwegian music.