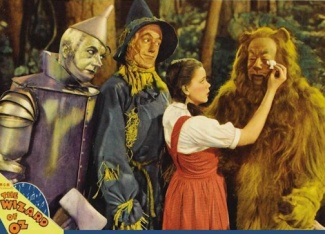 Moments like these are silly, but also just too heartwarming to laugh at.

During a dramatic moment, there is Narm: a line is said too emphatically, or the alien is obviously a guy in a rubber suit.

So why isn't the entire audience laughing?

Perhaps the rest of the work is so good, and they are too wrapped up in it to be bothered. Or what's cheesy is more the fun kind of cheesy, so they are grinning, not laughing. Or maybe Rule of Cool is working its magic. Or perhaps the Narm feels natural in the scenario presented (see image).

This is Narm Charm, something that by all reason should kill the drama, but doesn't. Of course this is subjective. Some people will still find the scene to be true narm. Others will find no narm. But to some, it's Narm Charm and all part of the fun.

If a remake does away with this, it can result in I Liked It Better When It Sucked.

Compare Camp, Ham and Cheese, So Bad It's Good (when something is liked because of the Narm).

No real life examples, please; this is an Audience Reaction trope, and as far as we know, Real Life does not have an audience.

Examples of Narm Charm include:

Do not state you disagree with an example, or that other people would. No example here is meant to be absolute.

Retrieved from "https://allthetropes.org/w/index.php?title=Narm_Charm&oldid=1941996"
Categories:
Cookies help us deliver our services. By using our services, you agree to our use of cookies.