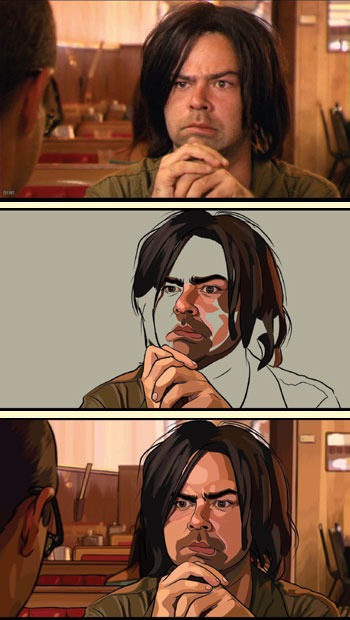 Rotoscoping is the process of drawing animation over live-action film.

Max and Dave Fleischer invented the process in 1915 to animate Koko the Clown of their Out of the Inkwell series, and later used it to animate Cab Calloway's dancing in three Betty Boop shorts, but the most famous Fleischer rotoscoping was done in the studio's Superman cartoons.

Disney Studios had used rotoscoping from Snow White and The Seven Dwarfs (explaining the slightly different art style of said characters) all the way to 101 Dalmatians.

Rotoscoping has been used lightly (to create realistic movements for otherwise stylized characters) and heavily (nearly tracing an entire actor's movements, form, and facial expressions). The downside of heavy rotoscoping is that the animated actors tend to teeter on the edge of the Uncanny Valley.

More recently, computer technology has created new life for rotoscoping as a medium, allowing for much greater detail and smoother movement. Fully computer-generated characters are Serkis Folk, much like fully animated characters give it the Roger Rabbit Effect.

However, rotoscoping has gotten a bad reputation among the animation community, including men such as Richard Williams, Milt Kahl and John Kricfalusi, being percieved as a lifeless, poor substitute for character animation. Even Ralph Bakshi, a frequent user of it in his feature films, admits that he loathed using it and that it was only used due to his low budgets. In fact, Max Fleischer himself came to realize the limitations of the very device he created early on, opting for more creative use of character animation instead (although he did make some exceptions).

Compare Motion Capture, which is how computers do it these days.

Examples of Rotoscoping include:

Retrieved from "https://allthetropes.org/w/index.php?title=Rotoscoping&oldid=1891409"
Categories:
Cookies help us deliver our services. By using our services, you agree to our use of cookies.