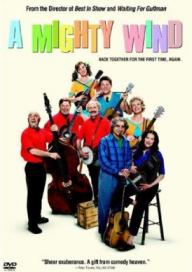 Back together for the first time again.

A Mighty Wind is a 2003 Mockumentary film about a reunion of Folk Music singers, directed by Christopher Guest. The movie's comedy is comparable to that of Guest's other films, This Is Spinal Tap, Best in Show, and Waiting for Guffman, as well as having mostly the same cast as those films.

The plot is started by the death of Irving Steinbloom, a folk music producer, whose children plan a reunion concert with several of the bands he worked with to honor his memory. However, there are several things that make this difficult, such as the fact that folk music duet Mitch & Mickey haven't spoken for decades since their messy breakup.

Tropes used in A Mighty Wind include:
Retrieved from "https://allthetropes.org/w/index.php?title=A_Mighty_Wind&oldid=1877798"
Categories:
Cookies help us deliver our services. By using our services, you agree to our use of cookies.