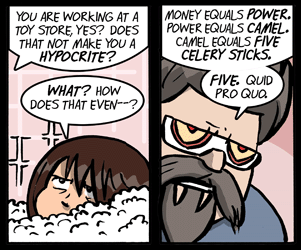 Can't argue with that logic.

Insane Troll Logic is the kind of logic that just can't be argued with because it's so demented, so lost in its own insanity, that any attempts to correct it would be met with more gibberish. Logic failure that crosses over into Parody or Poe's Law.

For examples of characters who engage in this, see The Ditz, Cloudcuckoolander, Strawmen, Moral Guardians, and of course trolls of both internet and mythological origin. For when the Insane Troll Logic actually leads to a true conclusion, see Bat Deduction and Right for the Wrong Reasons. If this trope is exaggerated beyond the point that it even makes grammatical sense, it can become a Word Salad Philosophy. Irrational Hatred may have this as its basis.

Retrieved from "https://allthetropes.org/w/index.php?title=Insane_Troll_Logic&oldid=1960478"
Categories:
Cookies help us deliver our services. By using our services, you agree to our use of cookies.