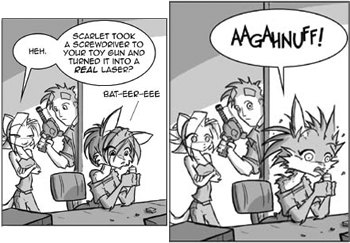 This character would be nothing more than The Ditz, except they have one area of expertise in which no one can beat them. When that skill or talent is needed, they suddenly switch gears from airheadedness to hyper-competency. Sometimes they don't even know that they're doing it.

Such a character who is well respected may become a Bunny Ears Lawyer. An extreme form may border on The Rainman. Opposite of the Modern Major-General, who appears to have specialised incompetence. Genius Ditz is closely related to Idiot Savant. Contrast with Cloudcuckoolander. Compare Too Dumb to Fool. Compare and Contrast Ditzy Genius.

Examples of Genius Ditz include:

Retrieved from "https://allthetropes.org/w/index.php?title=Genius_Ditz&oldid=1926445"
Categories:
Cookies help us deliver our services. By using our services, you agree to our use of cookies.