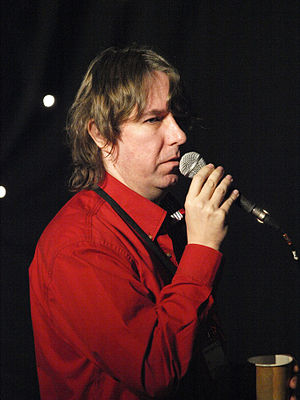 Alastair Reynolds is a Welsh author of a number of sci-fi novels, which have the tendency to be about as far up Mohs Scale of Sci Fi Hardness as it's possible to get while still remaining recognizably Space Opera. Of particular note is the total lack of Faster-Than-Light Travel in most of his books, despite their interstellar settings, and the extreme cultural divergences shown.

Most of his books take place in the Revelation Space universe, where by the 26th century humans have achieved slower-than-light interstellar travel, and find themselves needing to discover why all the other intelligent species they find evidence of seem to have gone mysteriously extinct.

Works written by Alastair Reynolds include:

Reynolds' Non-RS works feature the following tropes:
Retrieved from "https://allthetropes.org/w/index.php?title=Alastair_Reynolds&oldid=1822315"
Categories:
Cookies help us deliver our services. By using our services, you agree to our use of cookies.