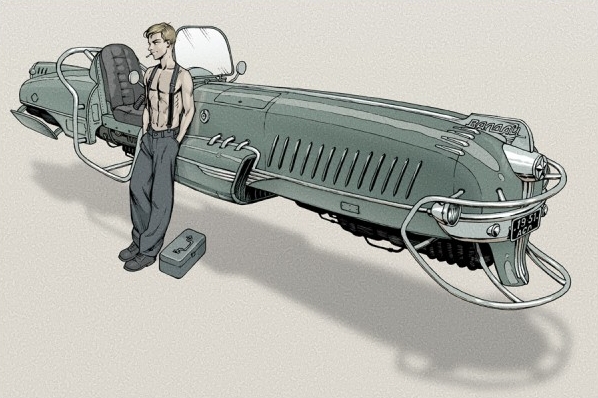 A Punk Punk genre of Speculative Fiction based on the 1920s - 1950s period, spiced up with retro-futuristic innovations and occult elements. The dieselpunk narrative is characterized by conflict vs the undefeatable (nature, society, cosmic), strong use of technology, and Grey and Gray Morality. The protagonists are often Heroic Neutral and have low social status.

Generally, dieselpunk can take inspiration from '20s German Expressionist films, film noir, 1930s pulp magazines and radio dramas, crime and wartime comics, period propaganda films and newsreels, wartime pinups, and other entertainment of the early 20th century. As this covers a broad spectrum, the precise sources of inspiration can vary greatly between dieselpunk works. Like Steampunk, Dieselpunk is a genre dictated primarily by its aesthetics rather than by its thematic content. Both grime and glamour have their place in dieselpunk.

Dieselpunk overlaps with Two-Fisted Tales and Raygun Gothic, but differs mostly in its Punk Punk theme. Two-Fisted Tales explore settings such as Heroic Fantasy, Space Opera, etc that are not properly a part of Dieselpunk, and Raygun Gothic tends to describe a period both chronologically and technologically later. Typically, Dieselpunk roots itself in urban and wartime settings of the 1920s to the late 1940s, both literally and figuratively 'down to earth'.

A common point of divergence from our timeline is that The Great Depression never happened, leading to further economic and technological growth and less of the warmongering typical of the inter-war era. World War II may still happen in some Dieselpunk settings, see below.

The term Dieselpunk was popularized by Lewis Pollak and Dan Ross in 2001 as the genre for their RPG Children of the Sun. Pollak stated that it was intended to be on the "darker, dirtier side of Steampunk" and should be considered a "continuum between steampunk and Cyberpunk."[1]. (On the other hand, noted reviewer Ken Hite described Children as "Not really diesel, and not really punk.")

To be noted: unlike the 2000s, the Diesel-powered car in the 1930s was a rare curiosity, only a single model being put into small-scale production in Germany during that age, but on the other side the vast majority of the population could not afford cars back then. The life of an ordinary citizen was far deeper influenced by the oil-burning locomotive, bus, ocean liner or neighborhood power plant. Still, during this period steam engines were gradually being replaced by diesel engines in many areas.

Vastness is key. This was the age of the zeppelin, the ocean liner, the flying-boat airliner, and the skyscraper. It also saw the first multinational corporations, large-scale social engineering, and mass political movements. World War I was still fresh in memory as the Great War, the most colossal conflict in the history of mankind. Man is dwarfed by his creations and things are subsumed into abstractions.

Period technology encompasses everything found in Steampunk, but internal combustion and electric power in combination with new materials (better alloys, plastics, etc) makes machinery lighter, stronger, and more versatile. The airliner is the prime example of this, but cars, trucks, tractors, and diesel-powered electrical generators are even more important in reshaping the world. Armored vehicles and useable submarines are less common but still important innovations. Wireless radio leads to the rise of broadcasting as an information medium. Anachronistic super-advanced technology, often of the Awesome but Impractical variety, such as Giant Flyer, Spider Tank, Disintegrator Ray might occur. Such technology might be secret super weapons of a villain, or Homemade Inventions by the hero or his friends.

Although the dieselpunk aesthetic can overlap with Raygun Gothic, and though dieselpunk is known for featuring Tesla technology and Wunderwaffen-style super-weapons, dieselpunk typically does not include transistor-based technology, other electronics or atomic power. In fact, another Punk Punk genre, Atompunk, was coined to describe fiction in this mode. Atompunk (such as the Fallout series and the comic book Fear Agent) takes inspiration from 1950s-era aesthetics and fashions such as Googie architecture and Jetsons-style technology, which typically lie outside the bounds of dieselpunk. The analogue sci-fi of Metropolis and Things To Come are closer to the dieselpunk tradition as it stands.

Dieselpunk often focuses upon air travel and combat, including such ideas as literal "flying fortresses", air pirates, dirigibles, early UFOs, hotshot flyboy pilots, etc. Fascination for military hardware, weaponry and uniforms of the early 20th century is also often in evidence and a great amount of dieselpunk media is concerned with war, especially the Second World War and and fictional variations upon it. Owing to its pulp roots, dieselpunk is often very adventure-based, full of exotic locales such as Mysterious Antarctica, Shangri La, Hollow Earth etc. Some Geographic Flexibility is to be expected.

Dieselpunk fiction can encompass the supernatural as well. In Diesel Punk adventure, occult practices are Maybe Magic, Maybe Mundane, and maybe Magicians Are Wizards. The works of H.P. Lovecraft, tales of Nazi occult research, contemporary expeditions to 'mystical' places such as Egypt, and early research into relativity and quantum physics have greatly contributed to the occult mystique that informs Dieselpunk. This tends to contrast with the 19th-century Gothic themes and spiritualism that show up in Steampunk.

As Dieselpunk is a post-modern look at the past, it is not limited to the tropes and stereotypes that characterized fiction of the day—instead, it can use these tropes to comment upon the past and reinvent it. Dieselpunk (along with steampunk) can encompass a range of authorial voices and themes. Female characters in Dieselpunk tend to be strong, encompassing flappers to pin-up girls and much more, and can include Rosie the Riveter-type action heroines, glamourous femme fatales, costumed crusaders, archaeologist badasses, dragon ladies, tough-talking reporters and other types common to pulp fiction of the era. Both male and female characters are typically Badass Normals with universal drivers' licenses.

Sub-subgenres are listed below as possible options of exploration, but as these categorizations may only describe one or two works, if any, they should be taken with a grain of salt.

Also called "Ottensian" Dieselpunk after Nick Ottens, some guy on the Internet, who postulated it. This is the most optimistic form of Diesel Punk. Progress seems unstoppable and the future is bright. Things are designed to be stylish and opulent, ornamental and efficient at the same time. Think Bauhaus architecture and design, Art Deco, Expressionism, the 1939 New York World Fair. A good setting for a Science Hero.

Similar to Diesel Deco, but generally Darker and Edgier. Emphasizes the downside of economic and technological progress. Society is plagued by crime and corruption, technology seems to be at its most effective in producing increasingly effective weaponry. The occult basically amounts to Black Magic (including exotic religions), Sealed Evil in a Can might turn up in an archeological dig and subsequently have to be stopped to avoid The End of the World as We Know It.

World War II is being waged (or World War I in some instances), but one or both sides are introducing superweapons, alien technology and/or occult forces into the mix, often with one or more Mad Scientists behind it all. For a less extreme variant, something like the real-life exploits of the nascent Special Air Service in collaboration with the Long Range Desert Group (briefly, Lawrence of Arabia upgraded with blast-incendiary explosives and "gunship jeeps").

Also called "Piecraftian" Diesel Punk, again named for some guy on the Internet. World War II did start and may still be in progress; if it isn't, either some kind of Cold War is being waged, or a One World Order has been established. Either way, The Government is intrusive and ruthless, ostensibly to protect the citizens. The political ideology might be any kind of totalitarianism, either one of the many real life examples of the period, a mashup of those, or a completely fictional analogue.

World War II did start and ended because there isn't anything left to fight over, and very few resources left to fight with, or even to sustain civilization. It's essentially a post-apocalyptic milieu, and certainly not a very common Diesel Punk flavor.

Examples of Dieselpunk include:

Dieselpunk is a modern genre, but some of the films and books of the period fit well, in the same fashion that Jules Verne's books can be posed as Steampunk.

Films not specifically dieselpunk, but which are related or inspirational to the genre:

Retrieved from "https://allthetropes.org/w/index.php?title=Dieselpunk&oldid=1892560"
Categories:
Cookies help us deliver our services. By using our services, you agree to our use of cookies.