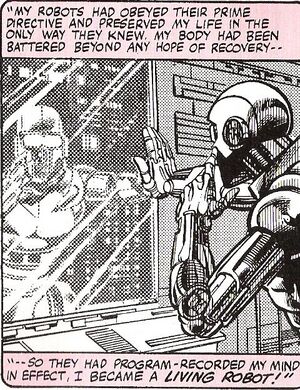 Alas! An ally or loved one is bleeding to death and about to die (Heroics optional)! With little time and no other options, the heroes are faced with only one alternative... an Emergency Transformation.

Humanity is not absolute—it is both graded and transitional. The heroes, having access to machines, magics, or curses capable of transforming someone into something less and/or more than human, will be forced to choose whether they let their friend die human or live on as something else.

If the ally is unconscious the decision is usually made for them. This tends to be especially tragic or anguishing as the transformee usually deeply hates his new form, be it because it's monstrous, associated with other unpleasantness, or weaker than their previous form. Expect the character to angst about his Metamorphosis endlessly, even if this isn't the case and he's actually better off than before.

However, the ally may have to go through the decision of making the choice between the sweet release of death, or a non-human life with super powers and possibly even eternal life. (Gee, what a tough call.) Occasionally though, it is and there will be much blame to give out because of it. You'd be surprised how distressing it can be when one is literally Unable to Cry.

There are a few general variations:

Expect these to be permanent, and for the naturally inclined to evil to think it makes them superior to "mundane" humans, while heroes will be Pro Human Transhumans. Frequently has a high rate of insanity and failure, at the least it makes the vain very distraught. Definitely a setup for lessons in What Measure Is a Non-Human?, many stories of the fable kind have characters cursed this way for harming a non-human creature. A character can go through the Stages of Monster Grief and get an epiphany that I Am What I Am, which ironically enough may trigger a return to human status. Someone who greets any emergency by transforming is probably just a One-Winged Angel.

Examples of Emergency Transformation include:

Retrieved from "https://allthetropes.org/w/index.php?title=Emergency_Transformation&oldid=1842013"
Categories:
Cookies help us deliver our services. By using our services, you agree to our use of cookies.