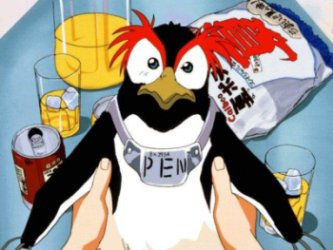 Penguins? In my Humongous Mecha Mind Screw anime series? It's more likely than you think.

The second dumbest bird in the world. Can only fly underwater.

Maybe it's because they're birds that, oxymoronically, can't fly. Perhaps it's that they waddle around on two feet and remind people of themselves. Maybe it's because they look like they're wearing little tuxedos. It could be that they have no natural fear of humans, and are relatively easy to work with. Or, simply enough, it may just be because they're cute and their name sounds funny. But whatever the reason, penguins are big, and adding them to a movie or show is almost guaranteed to up the ratings and the intake at the box office.

Not far in the past (the 06-07 region), penguins experienced a popularity surge due to movies such as March of the Penguins, Happy Feet, Surf's Up, and Madagascar. Opinion is divided as to why, but general consensus is that penguins are big money. Penguins are, in fact, the new monkeys.

Examples of Everything's Better with Penguins include:

King George III: Some people say I'm mad, and say the word "penguin" after each sentence. But I believe that we two can make Britain great, with you as the Prince Regent, and I as King Penguin.

"Today there was an accident...a busload of penguins...PENGUINS! They don't do harm to ANYONE! And they only have sex ONCE a YEAR! Oh, the INHUMANITY!"

Snake: Are you sure he's not a penguin?

Crump: You just don't understand the beauty of the penguin! They're so aerodynamically perfect. Can't you see it?! The shape...the smell...(lip-licking sound) the taste of penguins. Penguins. PENGUINS!
Tea: ...Are you finished--
Crump: Penguins!
'Tea: Stop saying 'penguins!

Band: If you think we're gonna keep this up all night, you're screwy! And we do mean you!

Brad "Wormtongue" Douriff: Who wouldn't want to go to New Zealand, they have penguins for Chrissakes!

...'cause penguins are so sensitive to my needs.