Everything About Fiction You Never Wanted to Know.
Jump to navigation Jump to search
/wiki/Alestormcreator 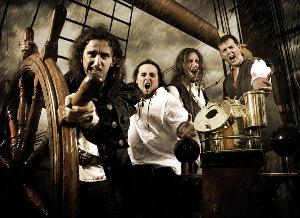 Alestorm is a power/folk metal band from Scotland and their main gimmick is the pirate theme of their music. Arr!

From there their popularity increased a fair amount and they're already doing world tours.

As Battleheart, they've released two EPs, Battleheart and Terror on the High Seas.

As Alestorm, they've released one EP and three studio albums:

Alestorm provides examples of the following tropes:
Retrieved from "https://allthetropes.org/w/index.php?title=Alestorm&oldid=1711949"
Categories:
Hidden category:
Cookies help us deliver our services. By using our services, you agree to our use of cookies.