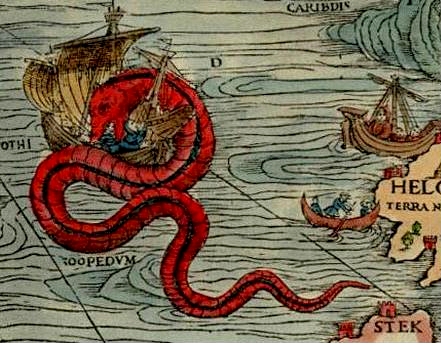 Here there be monsters.

Since ancient times, some cultures have had a superstitious fear of the ocean. It was vast and almost completely unknown. It could smash any ship man dared float on it, or sweep it away, never to be heard of again. Oh, and there may have been gigantic monsters in it. Until recent centuries many sea charts were illustrated with mythical and fearsome sea-creatures in unexplored regions, and even today the weirdest creatures on Earth are to be found beneath the waves, and we're still finding more. Some of them are pretty enormous, too (though they're not the most dangerous things down there).

There are many flavours of Sea Monster (well, yes, most taste a lot like squid, unsurprisingly). These subtropes include:

Please place examples belonging to those subtropes only in the specific page, not here.

Examples of Sea Monster include:

The "Iron Snakes" chapter has a mostly ocean-bound home world (their fortress-monastery is on one of the moons), and one of the challenges which aspirants wishing to join the chapter have to face is single combat with a sea serpent using only a harpoon and a canoe.

Also in Jolly Roger's Lagoon is a giant fish that swallowed Merry Maggie the barmaid. Strangely, it doesn't try to attack you, even when you knock all the teeth out of its mouth in order to rescue her.

Hydra in World of Warcraft are lizards with three heads. They have two legs and a heavy tail, so they basically move on a tripod as well. Normal ones are about the size of a woolly mammoth or so, but bosses are a little bigger. The Lurker Below is big enough to be a genuine kraken, and three other things in the game share its same in-game model: two similar wild animals related to specific quests and a sea goddess.

Indeed, so many different creatures like this existed in the past that one can argue that plesiosaurs can't have survived to the present, because the mosasaurs would've eaten them, long before the K-T extinction took down subsequent forms of reptilian Sea Monster.
The modern equivalent of Carcharocles megalodon might be the Whale Shark from a size perspective, but in every other respect it's basically a Great White that is... bigger.