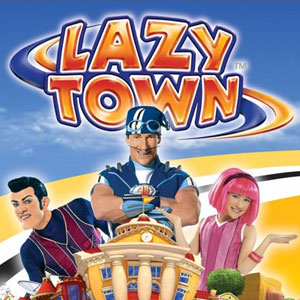 LazyTown is a 2004 children's show produced in Iceland, the brain child of former athlete Magnús Scheving (who also plays the hero, Sportacus). Its primary focus is promoting healthy eating and exercise. It's notable for being both educational and freaking hilarious, and shows some awesome stunts each episode.

Stephanie, our main character, is a new arrival in LazyTown. She quickly befriends the other kids (all puppets), after which they proceed to dance, play, bake cakes, pretend to be pirates and generally make a lot of noise to catchy kiddie Euro-techno music. This pisses off Robbie Rotten, LazyTown's resident Dastardly Whiplash, who can't sleep with all the noise going on. You see, being active is good for kids, and wanting to sleep all the time is bad, so Robbie is the bad guy. So Once an Episode, Robbie kidnaps/captures/tricks the kids, usually by dressing up in ridiculous outfits, until Sportacus does a billion backflips and saves them all. After which there is more dancing. ... it's Better Than It Sounds.

Although the original audio of each episode is in English, the show is filmed in Garðabær, Iceland, and the creator and the majority of the crew are Icelandic, resulting in some cross-cultural weirdness, such as the frequent Stephanie Panty Shots in the earliest episodes.

The current television show is not the first version of the story, though it is the first to be known outside Iceland. The previous versions were books and musicals both on stage and CD, and were all in Icelandic and set in the village of Latibær, meaning "LazyTown". While the basics of each character remained similar between the last Latibær production and LazyTown, several characters were dropped along the way, and those remaining were given more English names for LazyTown. The child characters in the Latibær musicals were all played by Caucasian adult humans.

LazyTown's distribution rights were once owned by Nickelodeon in the US, and it was originally commissioned by them, but it is a LazyTown Entertainment production. The "magazine format" LazyTown Extra (2008) is a co-production with The BBC. On April 18, 2011 PBSKids Sprout announced that it had acquired the rights to U.S. broadcasts of LazyTown, including the full first and second seasons and LazyTown Extra, which had never previously been broadcast in the United States. The network also aired exclusive content as interstitials as part of its "Super Sproutlet Show" programming block.

Tropes used in LazyTown include:
Retrieved from "https://allthetropes.org/w/index.php?title=LazyTown&oldid=1740635"
Categories:
Cookies help us deliver our services. By using our services, you agree to our use of cookies.