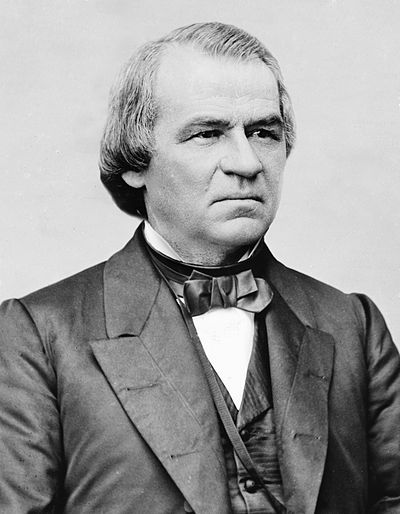 Andrew Johnson was the first US President to be impeached. He is generally considered to be one of the worst Presidents, though one could easily argue it's not entirely his fault. He was the only senator from a seceding state to remain pro-Union, so he was chosen as Lincoln's running mate to broaden the ticket's appeal and garner votes from Southern sympathizers. He was never intended to be anything other than a grab for votes. Then Lincoln got shot. Oops.

Johnson ended up breaking Jackson's previous record for most presidential vetoes. Obviously, the man didn't get along with Congress; they disagreed mightily about Reconstruction. Being a Southerner himself, Johnson wasn't going to penalize his own constituents too harshly. The Radical Republicans didn't much like this, and they kept competing until Congress finally passed the Tenure of Office Act, stating that the president couldn't fire any of his appointees without Congressional consent. The Radical Republicans knew Johnson would see this as a challenge to his authority, and violate it just to see what happened. He did when he fired Secretary of War Stanton, a Radical Republican raising havoc in Johnson's Cabinet. This was what they used to push through his impeachment. [1] Also, they sold tickets to the trial.

Johnson was acquitted by a single vote [2] and allowed to remain in office [3], but in the process, ended up losing pretty much all his political power. From that point until arguably the time of Theodore Roosevelt, Congress was effectively running the country rather than the office of the Presidency.

Tropes that Applied to Andrew Johnson

For a one-minute summary of his life check out this video.

Retrieved from "https://allthetropes.org/w/index.php?title=Andrew_Johnson&oldid=1868936"
Categories:
Cookies help us deliver our services. By using our services, you agree to our use of cookies.