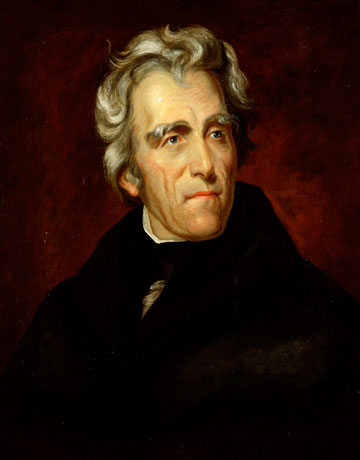 The guy who kicked out the Native Americans, basically.

Andrew Jackson was the seventh president of the United States of America, serving from 1829 to 1837. He was also a living testament to how Badass a man can be (although Theodore Roosevelt certainly would argue with that statement).

He was born on the border between North and South Carolina - his birthplace (maybe 30 km south of Charlotte) can be placed at one of two cabins standing scant yards apart, one on each side of the border. His father died before Jackson was born. At the age of 12, Jackson served in the Patriot militia under Col. Davies during the American Revolution. During the war his brothers and himself were captured and confined in disease-ridden quarters that lead to the deaths of his brothers, and of his mother who tended to them when they were sick.

After the war, Jackson had no immediate family left alive, and was taken in by a judge in Salisbury, North Carolina. This judge was himself one of the few survivors of a battle/massacre known at the time as the Waxhaw Massacre, now more commonly as Buford's Defeat, where he had been left for dead with over twenty wounds. Under his tutelage, Jackson studied law. Jackson then moved to western North Carolina, which later became Tennessee, and began a political career. During the War of 1812 (contemporary with the Napoleonic Wars, in which the United States fought the British) Jackson commanded US forces against the British and their allies in Georgia and Alabama, and in January 1815 made his name with his successful defense of New Orleans. He received the nickname "Old Hickory" from his troops because of his toughness. After that war he served again in a campaign against the Seminoles in which he controversially invaded Spanish Florida.

His marriage to Rachel Donelson Robards was considered bigamous since her divorce was not officially completed at the time of their wedding. Jackson believed his political opponents' use of this as an issue in the 1828 campaign resulted in her death before his inauguration. He was famously defensive of Rachel, even going into a duel against a judge that insulted her.

He was in many duels, number of which varies depending on what source you consult; some say 13, while others rank the number somewhere in the 100's, both of which are entirely too many times for any reasonable human being to stand in front of someone who is trying to kill them with a loaded gun. (source: Cracked.com, 5 Badass Presidents) He stopped when he was voted into office.

When Jackson became a senator, one of his foes from his duels was also in the Senate. The man had shot him, and he still had the bullet in his body. He soon got it out and even gave it to the man who shot him as a sort of peace treaty. When ever he'd get hemorrhages in his arm, he'd ask his servants for a razor and a bowl and cut them open to let them bleed out.

Jackson served as president from 1829 to 1837, and is known as the quintessential populist president. Jackson invited the public to his inauguration, and they famously trashed the White House. One of Jackson's most controversial measures was the removal of American Indians from the east coast to Oklahoma in what would be infamous as "The Trail of Tears", and Jackson is often painted as an anti-Indian racist because of this. The Trail of Tears actually went against a Supreme court Decision that recognized the Cherokee nation as as sovereign nation. Upon hearing of this decision, Jackson famously declared "Marshall [Chief Justice at the time] has made his decision, now let's see him enforce it". His was also the last administration for over 70 years that left the United States with a budget surplus at its conclusion, with Calvin Coolidge finally breaking the streak of budget deficits.

Towards the end of his first term and through his second term, he fought to shut down the Second Bank of the United States. The Bank served as a central bank, controlling currency and holding Treasury deposits, but its commercial activities were the focus of Jackson's rage. The struggle eventually resulted in an economic panic, but Jackson still believed he was in the right. It is enough to say that nothing short of death would have stopped Jackson, and bullets just weren't going to work.

Around the same time, he also faced a challenge from South Carolina, which claimed the right to nullify federal laws that opposed its interests, particularly tariffs. Jackson's vice president John C. Calhoun supported his home state's position and the president threatened to use military force against the state.

In 1835, Richard Lawrence made the first assassination attempt on a sitting president. Both pistols misfired and Jackson immediately attacked Lawrence with his cane until the president's aides restrained him. This was a couple decades before the Secret Service was formed, let alone took up presidential protection duties. Lawrence was later found to be insane and institutionalized. For some reason, Jackson was not.

In short, Jackson was a complex and fascinating man, and none too gentle with his adversaries (see above about his tendency to get into duels), and certainly shaped the United States as we know it today. Most importantly, he transformed the Presidency into the people's agent with broad powers to shape policy. And that's just the short version.

Technically, the last of the Founding Fathers-era Presidents (although some assign that status to either James Monroe or John Quincey Adams); beginning with Van Buren the remainder of 19th-century Presidents have an air of trivia-question obscurity (with one obvious exception and some other borderline cases.).

His Last Words were purported to be "I have only two regrets: I didn't shoot Henry Clay, and I didn't hang John C. Calhoun."

That's right. In a life rich with murdering people for little-to-no reason, Jackson's only regret was that he didn't kill quite enough people. People like Calhoun who, remember, was Jackson's vice president. The Nullification Crisis of 1832-33, which nearly started the Civil War thirty years early might've had something to do with it.

A one-minute biography of the guy can be found here.