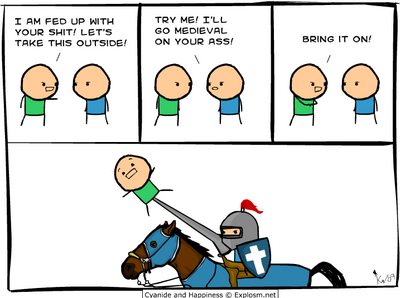 After attempting to establish rules or policies weighted in his favor, a character gets his comeuppance and learns An Aesop when the other characters twist those same rules against him. If it's a competition, it's because they left themselves open to Loophole Abuse.

The Knight Templar, the Anti-Hero, and those with even looser standards (but some standards) will often stick to Exact Words even as they declare I Gave My Word. A common trait of Lawful Evil characters. Also a common (and not always evil) way to subvert Just Following Orders or the Leonine Contract.

When setting up a Secret Test of Character, a character will often declare that the fate of the character being tested will depend on the "results" or "outcome", rather than on his success. (Though outright lying about what is being tested is not unknown.)

For magical enforcement of Exact Words, see Literal Genie. Often the cause of Prophecy Twist. Literal-Minded characters just do it because that's how they think.

Can be defended against with Legalese.

If someone follows established rules to annoy someone else, it becomes Bothering by the Book.

Subtrope of Double Meaning. Compare Heroic Vow and Ironic Echo. Unhand Them, Villain! is a specific variant. Threat Backfire is a common result. It's very commonly used in False Reassurance. The actual interpretation of the words is often Not Hyperbole. Can also lead to a Literal Metaphor and to Literalist Snarking. Also see No Man of Woman Born.

Examples of Exact Words include:

(Literally and precisely true -- Gilly accidentally poisoned Angelov; they then resurrected him with magic, but when he Came Back Wrong they bludgeoned him (back) to death with a shovel.)

Retrieved from "https://allthetropes.org/w/index.php?title=Exact_Words&oldid=1964123"
Categories:
Cookies help us deliver our services. By using our services, you agree to our use of cookies.