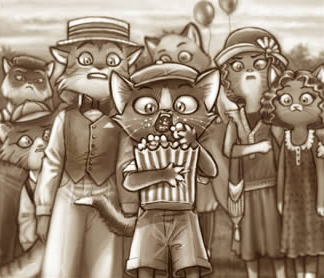 When a character is treating a certain scene as pure entertainment, they will often be shown eating popcorn or other stereotypical movie-theater food. Where they get it from is a mystery. Usually the scene will be something like a fight or a private conversation between lovers, that generally isn't intended for anyone's amusement (at least not in-universe). Almost inevitably, the character will be too fixated on the entertainment to actually look at what he's eating.

A lesser version is the mere comment "Oh, I've got to see this/hear this one." or "This is gonna be good." There's also the "selling tickets" version, a variation of which would be to play bookie and take bets. Often combinations of these variations are seen, sometimes turning said event into a circus. In extreme cases, bleachers or other seating arrangements and other arena like accouterments are often pulled out of Hammerspace to add to the ridiculousness of the situation (which promptly disappear after the event). The "sexy" version is when two women are going at it, and a male observer(s) appear as the eager audience.

This is ubiquitous enough that "*eats popcorn*" and similar remarks are a common response to Internet flamewars.

Compare and contrast Long Speech Tea Time (where the audience has a Spot of Tea or something because they're bored) and The Snack Is More Interesting (where someone is involved, but acts strangely unconcerned). Come to Gawk is often an element. If the situation is in really bad taste, the spectator is probably a Nightmare Fetishist.

Examples of Pass the Popcorn include:

Retrieved from "https://allthetropes.org/w/index.php?title=Pass_the_Popcorn&oldid=1967501"
Categories:
Cookies help us deliver our services. By using our services, you agree to our use of cookies.