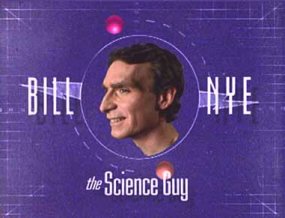 One of the best examples of the kids' Science Show genre from the '90s. Each episode is centered on an area of scientific study, varying in level of focus from a single concept to an entire discipline. The show's eponymous host, dressed like a cross between a Mad Scientist and a birthday party magician, would teach the subject with a genuine level of excitement and interest most men reserve for the Super Bowl.

The show was hosted by Bill Nye, a scientist, comedian and former Boeing engineer who got his start in television on the Seattle local comedy show Almost Live! (where he got the "Science Guy" epithet after correcting the host's pronunciation of Gigawatt) before starting his PBS show in 1993. (He also made several appearances on Disney shows prior to this, specifically the new version of the Mickey Mouse Club. Fitting, as this was produced by Disney.)

The show has a few internal Catch Phrases and idioms, most notably the introduction of new experimental equipment via the following formula: "[Somewhat-Generic-Description-of-Device] Of Science!" *fanfare*

Then, in almost every episode, they'd take a well-known song (usually Alternative Rock), cut the song length in half, then replace the lyrics with lyrics related to the show's topic. And a guy on YouTube uploaded every single one of them. On three occasions, actual rock artists did the song: Chris Ballew of the Presidents of the United States of America did a parody of his band's hit "Peaches", The Posies reworked their song "Flavor of the Month" with lyrics about ocean exploration, and the punk band Mudhoney did a cover of the show's theme song.

This show ran on PBS in the mid-1990s, but Bill Nye is still on TV. He has a series of specials called The Eyes of Nye, which are much closer in form to a TV Documentary series (like Nova) than his previous show. Today, he's an outspoken environmental activist. His series on Planet Green, Stuff Happens, is a show about the unintended environmental consequences of the stuff we do and use. He also occasionally guest-stars on the reality show Living With Ed; he's really Ed Begley Jr.'s neighbor, within a few miles, and the two have an ongoing rivalry to "out-green" each other. Bill Nye is also the go-to guy to explain interesting science stories on Cable news Outlets CNN and MSNBC.

As it ran during the same stretch as Beakman's World, the two shows get compared often, though Beakman's World tended to leer more on other aspects of knowledge than simply on science.

Oh, and Bill Nye was Humanist of the Year in 2010. Make of that what you will.

Tropes used in Bill Nye the Science Guy include:

Well that's our article, thanks for reading. Now if you'll excuse me, I've got some Tropes to edit. See ya!

Retrieved from "https://allthetropes.org/w/index.php?title=Bill_Nye_the_Science_Guy&oldid=1911479"
Categories:
Cookies help us deliver our services. By using our services, you agree to our use of cookies.