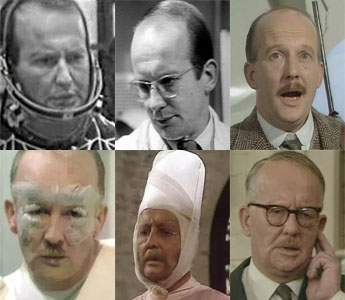 Haven't I seen you somewhere before, Michael Sheard?

A guest actor who returns to play more than one character in the same continuity.

As usual, Star Trek is particularly guilty (although perhaps somewhat understandable, with over 700 episodes across the various incarnations plus 11 movies). Alien makeup helps them get away with this, and using the same actors is actually advantageous. After all, if they've made a Ferengi prosthetic for you before, they don't have to go to quite as much effort to do so again...

The use of the same actor for different characters is typically intended to go unnoticed or at least unremarked. Ed Wasser played Shadow minion Morden in Babylon 5 but also appeared in the series pilot as a character credited as Guerra. Since that series was so intricately plotted, fans wondered if the Shadows were influencing events as far back as the pilot. No, said series creator J. Michael Straczynski, they just liked the actor's work in the pilot and cast him in a recurring role.

Spin-off shows will often encounter this, as the producers find actors they like for the new show.

This is such a common occurrence amongst the various incarnations of Law and Order, that fans of that show have come to call those who look familiar "Repeat Offenders". Primary cast members the late Jerry Orbach and S. Epatha Merkerson both played small one-off roles prior to being cast in the series. Other examples: Diane Neal, who played ADA Casey Novak in seasons 5-9 of SVU, previously appeared as a Wall Street broker who joined two more women in the gang rape of a male dancer during a party (see Double Standard Rape (Female on Male)), then killed one of those women, because she was going to come clean to the police about the rape.

When it is done for a purpose, you have an Identical Stranger, an Identical Grandson, or an Uncanny Family Resemblance.

Compare Celebrity Paradox, Hey, It's That Guy!, Hey, It's That Voice!, You Might Remember Me From. Contrast with The Other Darrin. Can be Handwaved by the Literary Agent Hypothesis.

You All Look Familiar is not related, unless character sprites and models can be considered "guest actors."

Actors who appear as guest actors in multiple roles

Actors who play roles as guest actors, then return in other roles as regular actors

Retrieved from "https://allthetropes.org/w/index.php?title=You_Look_Familiar&oldid=1775241"
Categories:
Cookies help us deliver our services. By using our services, you agree to our use of cookies.