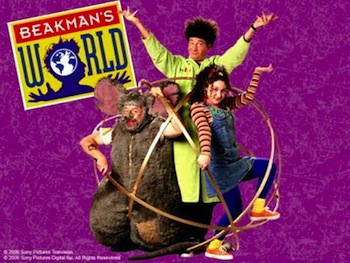 A Saturday morning kids' Science Show based on an award winning comic strip, Beakman's World was a fast-paced romp through topics germane to any kid's lives, like "How is snot formed?" and "Why do we fart?" (the latter was saved for the very last episode).

The show starred Beakman, played by puppeteer Paul Zaloom, as he answered questions from viewers with a zany tower wig and a green lab-coat. Helping him on his quest for science is guy-in-a-rat-suit (and resident skeptic who would be a Deadpan Snarker if he weren't wrong all the time) Lester (played by the late puppeteer Mark Ritts), and the lovely young female assistant, of which there would eventually number three (Alanna Ubach as Josie; Eliza Schneider as Liza; and Senta Moses as Phoebe).

The structure of the show was pretty controlled for being so chaotic. Each episode started with The Teaser, in which South Pole penguins Don and Herb (a Shout-Out to Mr. Wizard, aka Don Herbert) turned on the show after some witty hijinks. The first act focused entirely on one question. The second act was Beakmania, a rapid-fire run through many short questions, followed by a longer skit with a fun experiment or The Beakman Challenge. The third act was much like the first, focusing on another single question. The Tag gave the viewer one more piece of information, then ended with Don and Herb turn off Beakman after some witty hijinks.

Some staples of the show included Famous Dead Guys who'd drop by the studio, accompanied by the sudden disappearance of one of the cast (wink, wink), to tackle the question at hand. There were also several skits besides the Beakman Challenge that occurred on Beakmania, including "Those Disgusting Animals" and "Cooking with Art Burn".

The show lasted from September, 1992 to March, 1997. A total of three-and-a-half seasons' worth of shows stretched out to a full five seasons, first on TLC, then on CBS.

As it ran during the same stretch as Bill Nye the Science Guy, the two shows get compared often.

Lester: *holds a basket of berries* And these are my dingo berries

Don: Birds can talk?
Herb: Where do they get this stuff?
Don: Talking birds...
Herb: Of all the ideas.

"An' speakin' o' boils, check out dis baby right here! I'm savin' dat one for later when I make a batch of my secret sauce!"