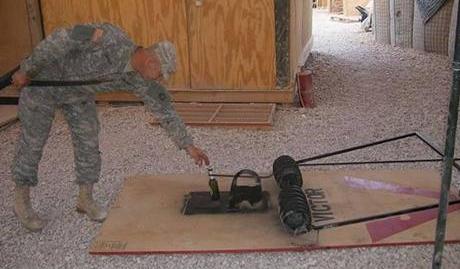 You know what they say: Build a better mousetrap...

For every insidiously clever and well-disguised trap, there are those that... well, they're not only rather conspicuous, but obvious to boot. Things like the Big Red Button with the dire warning signs; the dark alley in Vampire Town; the conspicuously untouched treasure chest; or the roomful of frighteningly realistic statues. These are the sort of things you would have to be an idiot to go near - or a monkey descendant that takes after their fore-bearers. In other words, they're Schmuck Bait.

Making schmuck bait irresistible is a good trick. Often it takes advantage of the inherent appeal of Forbidden Fruit, or a Curious as a Monkey character will ensure it gets taken, often in spite of warning cries from more Genre Savvy characters.

Note that this term is used differently by screenwriters. It most commonly refers to Like You Would Really Do It, and can also simply refer to any sort of audience misdirection.

See also Genre Blindness, Too Dumb to Live, Idiot Ball, Distress Ball, What Does This Button Do?, Press X to Die, Reverse Psychology, Who Would Be Stupid Enough...?, Don't Touch It, You Idiot!, Tempting Fate, and You Have Been Warned. If taking the bait doesn't hurt you, it's a Fake Trap. If taking it does something good, it's Violation of Common Sense. If that something good is being able to progress, it's Stupidity Is the Only Option (Trap Is the Only Option for the non-video game version). If someone fell into a Schmuck Bait one day but understandably didn't noise about it, he may be subject to Oblivious Mockeries. Not to be mistaken for Snark Bait, nor for something that actually baits your schmuck.

Examples of Schmuck Bait include:

Several minutes later, the sole remaining member of the mook squad that finds it, while surrounded by empty suits of armor piled on the ground, calls for backup. Then picks it up.

Cuts to the alien, staring in confusion at the little red button. He shrugs and pushes it. Cue explosion and Zorg's unflinching smoke.

People actually did it. Even the correct link is Schmuck Bait.

Retrieved from "https://allthetropes.org/w/index.php?title=Schmuck_Bait&oldid=1966227"
Categories:
Cookies help us deliver our services. By using our services, you agree to our use of cookies.