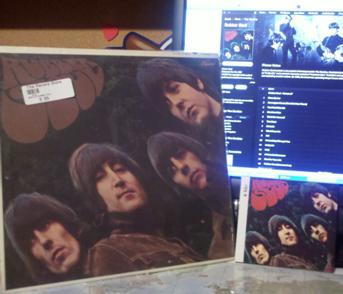 Be it LP, CD, or distributed digitally, an album is still an album.

While most people today are familiar with the modern concept of an album, said concept being a collection of several musical tracks together in a single package (such as an LP, a CD, or a cassette tape), the album was not always as ubiquitous as it is today, and the way albums are packaged has changed as well. The first albums were released in bundles which resembled photo albums, books containing several 78-RPM gramophone discs. The idea of having larger, long-playing vinyl discs to fit a collection of music on was introduced by Columbia Records in 1948, with these 12-inch records capable of having 23 minutes of audio on each side and having much smaller grooves.

Despite this advancement, the album did not catch on for a while. Singles (which themselves became more popular as 45-RPM vinyl or gramophone discs) tended to be the main way that music was consumed by the public for a long time. However, in the 1960s, albums became more important, as musicians began working more carefully on them as a unit of expression themselves rather than just a collection of randomly put together songs. Concept Albums, Rock Operas, Progressive Rock music, which used the format to its fullest potential and pushed it to its limit and beyond, also allowed for an exponential increase in the importance of albums.

In recent years, however, the album has had a decline in popularity. Part of this is due to the rise of file-sharing networks making music more accessible for people and, of course, less costly. Digital music stores, such as Apple’s iTunes or Amazon’s Amazon MP3 service, have also allowed people to purchase individual tracks instead of making people purchase whole albums if they do not desire to do so. Despite this, the album continues to enjoy some degree of popularity, even if some people believe it is a dead format.

For more information, see The Other Wiki’s article on albums.

The following 56 pages are in this category, out of 56 total.

Retrieved from "https://allthetropes.org/w/index.php?title=Category:Albums_Index&oldid=1522440"
Categories:
Cookies help us deliver our services. By using our services, you agree to our use of cookies.