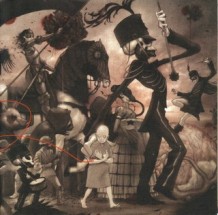 The Black Parade is an album and Rock Opera by My Chemical Romance. It tells the story of a terminally ill cancer patient (known simply as "The Patient") and the last thoughts and visions that go through his head as he lies dying in a hospital. When death arrives for him, it appears to him as a parade, recalling the fondest memory he has of his past.

With its polished, pop-punk influenced sound, the album gained the attention of a larger audience than the band's earlier releases.

Track list:
Tropes used in The Black Parade include:
Retrieved from "https://allthetropes.org/w/index.php?title=The_Black_Parade&oldid=1643448"
Categories: