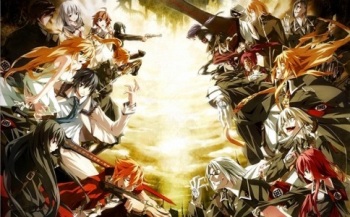 Battle Royale to run away from really fast!

A visual novel by the company Light (no not that light)[who?] that has had a colorful release history.

Ren is a high school student. He had a violent fight against Shirou, and was hospitalized for two months. One day, he leaves the hospital, and tries to start a new life. But, it never comes to him. A dream of guillotine..., a murderer who chops off someone's head..., and the knights who chase him.... Ren crosses over the boundary between ordinary life and extraordinary life. "I just wanna go back..., to a boring but peaceful life...." A voice of Shirou suddenly echoes..., "If you live in this town, you'll go mad sooner or later...." A war.... What will happen to Ren in the end...?

Originally intended to be a visual novel with only a single route; Dies Irae underwent some quick rewrites due to Executive Meddling after artwork posted during development lead to interest in characters who were not the main heroine.

Dies Irae: Also Sprach Zarathustra: Had routes for two heroines: Empathic Weapon Maria and Ren's Childhood Friend Kasumi. Due to the hasty rewrite certain key scenes were shortened and back story was left out.

Dies Irae Acta est Fabula: Added two additional routes one with Ensemble Darkhorse Tusndere character Rei Sakurai. The other a route focusing on Emotionless Girl Rea Himuro and adding a somewhat vague ending that was filled out in a drama CD.

On the surface it is a regular supernatural story with lots of Gratuitous German and Latin but its focus was truly on the Rule of Cool and its unapologetic admission that although the story is cliche, it was the characters that would drive the story and their interactions received most of the effort.

A PSP version was released in June 2012 with the appropriate changes called Dies Irae Amantes Amentes.

Tropes used in Dies Irae include:

Retrieved from "https://allthetropes.org/w/index.php?title=Dies_Irae&oldid=1867036"
Categories:
Cookies help us deliver our services. By using our services, you agree to our use of cookies.