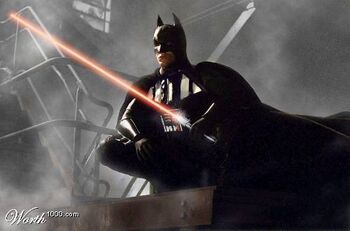 Sith Batman. The Force is weak in you, you superstitious and cowardly lot.

Your average Badass Normal can take on monsters, supervillains, and cosmic horrors with nothing but intense training and sheer determination. But that other guy can blow things up with his mind. And so can the villains. How could that puny human possibly compete with that? In short, despite his amazing capabilities, the Badass Normal just doesn't seem to be Badass enough. Time for a convenient power upgrade.

He may find some new Applied Phlebotinum, or discover a new power lurking within himself. Perhaps a sudden revelation reveals some otherworldly origin in his background, or he has an encounter with mysterious beings that leaves him forever changed. Or perhaps his badassness just escalates beyond the limits of normal humanity. Either way, an upgrade of this type may be required just so the Badass Normal won't become completely irrelevant compared to his superpowered comrades. If the Sorting Algorithm of Evil leaves him too far behind, and his role seems to be reduced to getting his ass handed to him, he may otherwise have to be Put on a Bus so he doesn't get in the way.

Keep in mind that to qualify as a Badass Abnormal, a character must spend a significant amount of screen time as a Badass Normal before gaining his upgrade. For example, Hal Jordan of the Green Lantern series starts off as a Badass Normal (he's an Air Force pilot) but gets his powers so early in the story that he cannot be considered a Badass Abnormal. Likewise, fellow Green Lantern John Stewart used to be a member of another Corps, but that wasn't even brought up until decades after his introduction. If the power upgrade is a part of the character's origin story, then he doesn't count as a Badass Abnormal. If the character only uses his powers in extreme circumstances, he probably Fights Like a Normal.

Compare Took a Level in Badass, where a character who was legitimately weak gets a power boost. Power Loss Makes You Strong and Boxing Lessons for Superman are inversions.

Important Note: Badass Abnormal is a trope that specifically deals with a Badass Normal who gains superpowers. It does not mean "Badass with superpowers." There are plenty of other Badass-related tropes to deal with those. Please help us fight this Trope Decay.

Examples of Badass Abnormal include:

Retrieved from "https://allthetropes.org/w/index.php?title=Badass_Abnormal&oldid=1658622"
Categories:
Cookies help us deliver our services. By using our services, you agree to our use of cookies.