Ascend to a Higher Plane of Existence 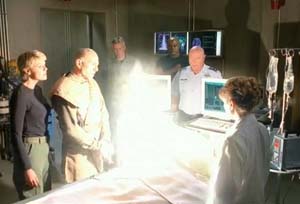 It's like being put on a glowing, celestial bus.

The character ascends to a higher state of being, even becoming a god.

It is mostly a way to pay off a character. Or play off, in some cases. A way to put the character on a bus, though that's not all that it's used for. If the writers should need the character back, its easy to reverse, in which case the character will Descend From a Higher Plane of Existence as a God in Human Form.

The Singularity can cause whole populations to ascend.

Examples of Ascend to a Higher Plane of Existence include:

Retrieved from "https://allthetropes.org/w/index.php?title=Ascend_to_a_Higher_Plane_of_Existence&oldid=1878688"
Categories:
Cookies help us deliver our services. By using our services, you agree to our use of cookies.