Light Is Not Good 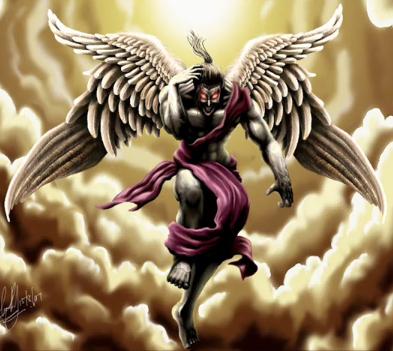 If he has angel wings, he's a good guy, right? Wrong.

The Light seems like a good, kindly thing, especially compared to that bad old Darkness. Whereas Darkness is usually concerned with kicking puppies, eating children, and laughing its head off, the forces of Light generally worry about nicer things, like singing with the birds, helping little old ladies cross the street, and... well, you know, being a Hero. Whereas the Dark Is Sexy and tends to dress that way, the Light tends to be a bit more conservative when it comes to clothing. Women serving the Light tend to really appreciate this, considering what the Darkness usually makes its women wear (though the color of Light's wardrobe is more ideal for wet T-shirt contests). Whereas the Darkness seems to revel in lawlessness and chaos, the Light tends to prefer law and order, providing for properly maintained roads, a court system, and safe cities. And trains that run on time.

But in one of those instances where you should Beware the Nice Ones, the Light isn't always what it appears to be. Sometimes, a battle with an obviously Light-wielding character will not result in Defeat Meaning Friendship or an Epiphany Therapy, but will just end with a laser-scorched corpse and the shiny happy killer skipping off to continue using his sunshine-fueled powers to wreak decidedly unholy havoc.

See... it turns out that, just like how, sometimes Dark Is Not Evil, sometimes Light Is Not Good.

This Trope is an inversion of the stereotype that "Light = Good". Like with Dark Is Not Evil, Light Is Not Good can Subverted Trope or Averted Trope a number of other Tropes depending on how it comes into play -- usually Beauty Equals Goodness and Good Colors, Evil Colors, among others.

The mildest form of this Trope involves beautiful, charismatic villains dressed in white and surrounded by religious symbols. A step further features a villain who wields Light as an elemental power. Whether by technology or magic, he can bend physical light to his whims, displaying such powers as beauty-enhancing sparkles or an angelic glow, optical illusions and holograms, Mind Control through Laser-Guided Amnesia, blinding flashes, and laser beams. For artistic contrast and further deconstruction, he might be opposed by a hero who uses shadows and darkness as Elemental Powers.

See, Light and Dark are both oversimplified metaphors for Good and Evil, not truly synonymous terms. Looking at the matter rationally, too much sunlight causes burns, sunstroke, and drought, not to mention skin cancer which is bad; whereas nightfall and sufficient shade provide relief and rest, which is good. So, neither physical brightness nor physical shade can be all good or all bad. Elements are properly value-neutral.

Anti Heroes generally if not always fall under Dark Is Not Evil rather than this Trope. Light Is Not Good is when a character is directly bad, directly villainous -- and still has Light powers. Depending on Character Development, they might be sympathetic, perhaps well-intentioned but horribly misguided. Or they could be the most gleefully twisted bastard imaginable.

Commonly used with Fallen Heroes and Knight Templar. Often used together with the Path of Inspiration or Corrupt Church. Perhaps might even go so far as to cast aspersions on a Council of Angels. At the most extreme, it declares God Is Evil. May well occur in a villain's Yin-Yang Bomb, in which case the heroes probably need to produce one of their own to combat it.

See also Pure Is Not Good, Man in White/Woman in White, Lawful Stupid, Good Is Boring, God Is Evil. May result in Good Powers, Bad People. Often overlaps with Holy Hand Grenade. Oh, while we're at it, Frickin' Laser Beams are made of light too. Fire can be applied to this as well, as well as electricity. In this case, see also Bright Is Not Good, which only applies to colors. Not related to Good Is Not Nice, though the borders can be fluid.

Related to Daylight Horror. Occasionally the Sun expresses this trope in fiction, either as sun powered villains or as evil or creepy disembodied heads representing the Sun. See also Hiding Behind Religion, which can be considered a more realistic version of this trope.

Examples of Light Is Not Good are listed on these subpages:
Retrieved from "https://allthetropes.org/w/index.php?title=Light_Is_Not_Good&oldid=1501612"
Categories:
Cookies help us deliver our services. By using our services, you agree to our use of cookies.