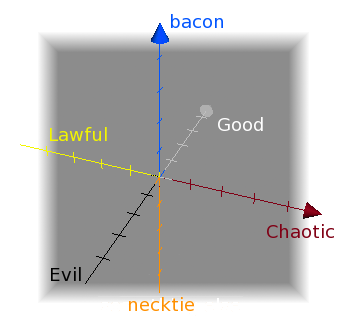 To say that questions of morality are thorny and filled with gray when they aren't being hammered between stark absolutes is putting it mildly. Because of this there can be great drama when characters who represent a wide range of moral viewpoints come together or into conflict.

The strangest of these characters are those who espouse Blue and Orange Morality. These characters have a moral framework that is so utterly alien and foreign to human experience that we can't peg them as good or evil. They aren't a Chaotic Neutral Unfettered, though they may seem to act terrifyingly randomly; nor are they necessarily a Lawful Neutral Fettered, because our and their understanding of 'law' as a concept may not even be equivalent. There might be a logic behind their actions, it's just that they operate with entirely different sets of values and premises with which to draw their conclusions.

Just to repeat: that doesn't make them bad, although they are often liable to commit acts we would see as horrific; in that case, they're likely to follow these with completely benign behavior, and not act as if anything was the matter. Because in their world/mind, that's just what they do. This trope is one of the trickier to pull off well, because Most Writers Are Human, and it's often hard to portray alien without simplifying it to Evil-by-another-name.

This is similar to Values Dissonance, but the main difference is that societies with Values Dissonance can, at least on a basic level, generally measure one another by the same concepts of Good and Evil, or even Law and Chaos. With Blue and Orange Morality, the values are so foreign, that such concepts can no longer be applied. They may not even know what these things are, or even if they do, will often find them confusing. The concepts are not necessarily beyond their grasp, mind you, but are just not something which they'd place any importance on.

Conversely, they may have these concepts, but apply them in vastly different ways. Such as regarding motionlessness as the epitome of evil, or viewing exploration as an element of chaos.

Note that cases involving solely a misapprehension of facts and consequences do not count here no matter how alien the reasons; if, for example, a race of aliens thinks killing is okay because its own members respawn within a day with no harm done, and mistake humans as working the same way, that doesn't mean they wouldn't balk at killing if they realized the degree of harm it causes to other creatures. In this case, they may be working by comprehensible moral standards and just gravely mistaken about the implications of their actions.

Likely candidates for Blue and Orange Morality include the Fair Folk, who follow rules of their own making; Eldritch Abominations that are beyond comprehension; the more exotic Starfish Aliens; AI's and robots, especially when super smart and incapable of emotion. An individual human (or single members of any species whose majority is using the greyscale morality) who operates on this is The Ubermensch of Nietzschean philosophy (a human being who has developed their own Blue/Orange set of morals). A Nominal Hero may have this motivation as well. Moral Sociopathy overlaps strongly with this trope for obvious reasons, though this is not always the case.

Compare Xenofiction, Humans Are Cthulhu, Humanity Is Infectious (all often involving this), Non-Malicious Monster (sometimes requires this), Above Good and Evil, Affably Evil / Faux Affably Evil (they sometimes can come across as this), Even Evil Has Standards (when handled poorly or bizarrely), and Evil Cannot Comprehend Good (less elaborate forms that resemble this in practice). When two sides go to war and nothing will stop them except total annihilation, that's Guilt-Free Extermination War.

Whether it has anything to do with us is left as an exercise for the reader.

Examples of Blue and Orange Morality include:

Retrieved from "https://allthetropes.org/w/index.php?title=Blue_and_Orange_Morality&oldid=1958001"
Categories:
Cookies help us deliver our services. By using our services, you agree to our use of cookies.