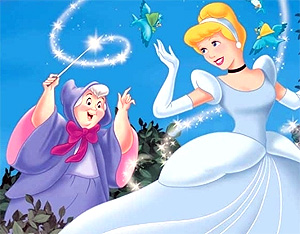 The dream that you wish, she'll grant you.

A fairy tasked with helping out the protagonist of a tale, whether it's granting wishes, or other things, often with the aid of a Magic Wand. Why this is so is almost never said, although some stories will have an organization of them.

This is also a highly Discredited Trope these days, usually associated with the most archaic parts of Fairy Tales, even though this trope is a lot more recent than most of those stories, and in fact very rare in fairy tales collected by folklorists. It's still often played straight too, it's just so useful that writers can't resist it, although they often disguise the fairy godmother as something else.

Some stories might make this a Deus Ex Machina.

A Sub-Trope of Our Fairies Are Different.

Examples of Fairy Godmother include:

Retrieved from "https://allthetropes.org/w/index.php?title=Fairy_Godmother&oldid=1712935"
Categories:
Cookies help us deliver our services. By using our services, you agree to our use of cookies.