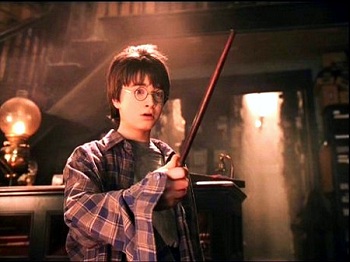 The Magic Wand, the magician's all-purpose Weapon of Choice.

The Magic Wand is a unique weapon in that unlike swords, bows or guns, this weapon is generally not for use in physical combat, but is instead a purely magical weapon. In general a Magic Wand is any device that enhances magic for producing spells, or aid in combat, or—less frequently—enables the use of magic in the first place. The actual wand-form, being exceptionally portable, is the most well known, and probably the most used version, however. Circe used a Magic Wand to convert Odysseus's men to swine, thus making this one Older Than Feudalism.

The Magic Wand may overlap with Simple Staff or Carry a Big Stick, resulting in the hybrid-weapon capable of both magic and melee combat, the Magic Staff. However, other times it is instead a talisman or jewel that might be a carved totem or voodoo doll, and completely incapable for any melee use at all. Other forms might be a crown or ceremonial headdress, with accompanying robes. It's not uncommon for any of these forms to be Loyal Phlebotinum.

If the wand in question appears on a fortune-telling card, it's Tarot Motifs - likely either the Magician or the Ace of Wands. Sometimes in Anime and Manga, a staff's powers will be tied to an onusa for use by Miko or onmyoji.

These also tend to be more associated with Fairies, especially Fairy Godmothers, than wizards.

Examples of Magic Wand include:

Retrieved from "https://allthetropes.org/w/index.php?title=Magic_Wand&oldid=1772950"
Categories:
Cookies help us deliver our services. By using our services, you agree to our use of cookies.