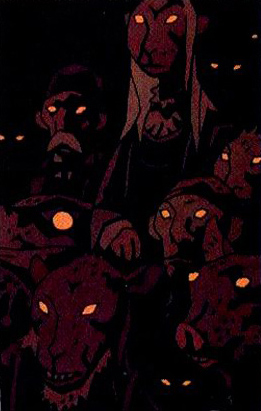 They will not go gently into the night; they are the night.

Modern society has lived with the Disneyfied vision of Fairies for so long—the Fairy Godmothers of "Cinderella" and "Sleeping Beauty", Tinkerbell in Peter Pan[1]—that it seems hard to imagine that some would consider Fairies evil.

And yet, some of them were. The Fairies of old weren't cute little bewinged Pixies who fluttered happily around humans. Elves didn't make children toys or live deep in forests with no interaction with mortals. At best, they would interact with humans with either no thought to the consequences of their actions (Little People who put Rip Van Winkle to sleep) or delight in the mess they're making of mortal lives (Oberon, Puck, and the rest in A Midsummer Night's Dream). At worst, they're like The Joker with magic; otherworldly horrors who kidnap humans for torture and rape - or sometimes even worse things ("Tam Lin"). The Fair Folk almost always live in the land of Faerie.

The original terms for these (at least, in Scottish lore) were the Seelie (vaguely goodish) and the Unseelie (Exclusively Evil). In Ireland, they were called sidhe ("shee") and would sour milk, kill animals, and swap people for changelings. Boys were dressed in girls' clothes until the age of 5, because otherwise the sidhe would steal them for their armies. Building anything near a fairy fort was very bad. Going alone into a marsh was an invitation to get entranced by Cold Flames into their halls. Even if you were allowed to leave their kingdom, you could find that centuries have passed, and crumble into dust. Their dances would catch any human passerby and make him dance to exhaustion at best.

A variety of superstitions developed to keep the fairies at bay, or to pacify them. Salt could keep a baby from being stolen. Iron, holy water, crosses, and holy words/names scared fairies away. Depending on the version, they may also hate the sound of bells—whether it's church bells or any bell-ringing at all also depends on the version. Some people put out offerings of milk or food for them at night.

Then came the Bowdlerisation, and suddenly, all Fairies got a lot more cute. (And acquired wings, which were unknown in older folklore.) This began in Elizabethan times, where on one occasion a woman who claimed to commune with the Queen of Fairies was burned at the stake as a witch. It is not for nothing that William Shakespeare has Oberon explicitly disclaim that he doesn't mind church bells—to show he was not a demon. It accelerated thereafter, resulting in the Victorian image of fairies, which is generally how they are popularly conceived today.

More traditional Fairies are a bit of an odd duck of a trope. Old as anything, long forgotten, they're starting to re-emerge in modern fiction with a vengeance. Fairies may present themselves as amazing, beautiful, graceful and magical—but underneath all the Glamour, they're creepy little buggers for whom empathy is a concept as alien as the idea of blue as a number. They might take a shine to humans, but at best, it's the love a human feels for a pet, and descends down through the love an entomologist feels for a rare insect, continuing down through the love a glutton feels for prime rib... and you really don't want to see what it's like at its worst.

Their society and customs, if they even have the inclination to associate, are often extravagant and elegant but amoral and inscrutable, sometimes even for some unfortunate Fairies themselves. It's by far not certain what degree of loyalty or compassion they feel for their conspecifics.

The return of this trope to popular awareness can be traced back to at least 1988, when The Sandman, a Comic Book penned by Neil Gaiman, featured a number of Fairy characters who were often either outright malicious or self-centered to the point of sociopathy. Gaiman also used traditional Fairies in his novels and short stories as well as other comic books, and directly inspired authors such as Terry Pratchett (a friend of Gaiman's in long standing) and Susanna Clarke, author of Jonathan Strange & Mr Norrell. Ten years earlier, the artist Brian Froud did a series of illustrated books cataloging the Shee or bad fairies, and their close cousins, the goblins. His work was also the inspiration for the 1982 film The Dark Crystal.

These Fairies can sometimes share a world with Tolkienesque Elves, who, depending on the setting, may not themselves officially be part of Faerie. The principal distinction between the two, if there is one, is that Elves are a mildly superhuman longlived race living in the mortal world (or a distant corner of it), whereas Fairies are much more intensely magical, and live in a Fairyland outside the mortal world.

Ever wonder why Fairies are called "the Fair Folk" or "the Good Folk"? It's because calling them an unkind name is a good way to bring down their wrath upon your head. Especially The Wild Hunt. In addition, simply using the word "fairy" is considered insulting. (It's not clear why. The popular theory is it's like calling a human an ape.) On the subject of names, there's a 90% chance that a named fairy leader will be called Oberon, Titania or Mab. Other fairies are just as likely to have names drawn from A Midsummer Night's Dream.

See also Changeling Tale, a specific subtrope having to do with fairy abduction, doppelgangers, and the like. Not to be confused with Changeling Fantasy which is a type of Cinderella Situation.

In a manner of speaking, the old version of the Faerie has been replaced with Alien Abduction. In both cases, you have creatures who are ineffable and don't understand humanity, who randomly abduct humans, play with them, and return them with Time Loss and occasionally strange powers/afflictions. Periodically, there are tales of those who have dealt with them and benefited, but for the most part, mundanes are merely their playthings.

Luckily, much like vampires, fay traditionally have a few weaknesses that can be exploited, including:

Often found in concert with Grimmification.

The Fair Folk are often depicted as an Inhumanly Beautiful Race. Compare and contrast Fairy Companion, Our Elves Are Better, Our Fairies Are Different, Witch Species, Our Goblins Are Wickeder, All Trolls Are Different, Our Mermaids Are Different, and Our Dwarves Are All the Same. See also Youkai for a rough Japanese equivalent. The Greys is more modern trope with many similarities. An extreme example may be an Eldritch Abomination or Humanoid Abomination. When humanity appears this way is Humans Are Cthulhu.

Examples of The Fair Folk include:

Retrieved from "https://allthetropes.org/w/index.php?title=The_Fair_Folk&oldid=1966886"
Categories:
Cookies help us deliver our services. By using our services, you agree to our use of cookies.