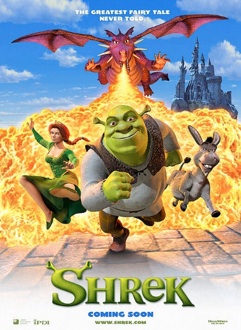 A CGI-animated tetralogy by Dreamworks Animation loosely based on a 1990 book about an ogre in a fairy tale land, who just wants to live in his swamp undisturbed, but is dragged against his will into fighting for the fate of entire kingdoms.

In the first movie (2001), Shrek is driven into conflict with Lord Farquaad, who banishes all magical creatures from his kingdom, forcing them to seek refuge in Shrek's swamp. He teams up with an annoying talking donkey named Donkey, and is forced to rescue Princess Fiona (Cameron Diaz) for him so Farquaad would give him the swamp back. However, Fiona's previously-unknown curse, and Shrek falling in love with her, disrupt Farquaad's plans to become a king by marrying a princess.

In Shrek 2 (2004), Fiona, now an ogress and Shrek's wife, travels with him to the kingdom of Far Far Away, ruled by her parents. Meanwhile, Prince Charming, who was supposed to rescue Fiona instead of Shrek, desires the kingdom for himself, helped by his mother, the Fairy Godmother. He first tries to dispose of Shrek by deploying Puss-in-Boots, a famous ogre hunter, but the cat ends up becoming friends with Shrek and Donkey. After Shrek drinks a potion that temporarily makes him and Fiona human, the Fairy Godmother makes Charming pose as the human Shrek.

In Shrek the Third (2007), King Harold dies, leaving the ogre couple as his successors, and Shrek, unable to accept this fate, leaves Far Far Away to search for another heir to the throne, a teenage loser named Arthur Pendragon. Meanwhile, Prince Charming rallies various fairy tale villains and organizes a coup, taking over Far Far Away, and Fiona (pregnant with Shrek's kids) assembles her own team of fairy tale princesses to confront him.

In Shrek Forever After (2010), Shrek, now a domesticated family man, longs for the days when he felt like a "real ogre" and is duped into signing a pact with the smooth-talking dealmaker Rumpelstiltskin. Shrek suddenly finds himself in a twisted, alternate version of Far Far Away, where ogres are hunted, Rumpelstiltskin is king and Shrek and Fiona have never met. Now, it's up to Shrek to undo all he's done in the hopes of saving his friends, restoring his world and reclaiming his one True Love.

Notorious for its humor, both witty and slapstick, for turning everything we knew from fairy tales upside-down, and for a ridiculously modern feel of its medieval fantasy setting. The first film's huge success (combined with it easily outdrawing the Disney Animated Canon entry Atlantis the Lost Empire, which opened a month later) convinced Dreamworks that 2D is dead, and scrapped their 2D films all together, "apologized" for them, and even convinced other executives in the same idea, paving the way for all films thereafter—it is unclear if 2D films will regain top priority again. It was the first film to win the Academy Award's Best Animated Feature category. Shrek and its sequels are Dreamworks' defining hits, "Fiona's Theme" plays during the studio's Vanity Plate in all their animated films now, and the character of Shrek is now their unofficial mascot.

Adapted into The Musical, which opened on Broadway in 2008 and has since closed and launched a United States tour. There is also a Christmas Special, Shrek the Halls, and a Halloween Special, Scared Shrekless. Another film, entitled Puss in Boots was released in 2011. It is set before the events of Shrek 2, and chronicles the backstory of Puss in Boots. It's worth to note that the film is "ogre-less". Guillermo del Toro is the executive producer. Universal Studios features Shrek 4D, which is set immediately after Shrek and Fiona's wedding and details a ghostly Lord Farquaad's attempt to get Fiona back.

Now has a fledgling character sheet.

Shrek was named to the National Film Registry in 2020.

The following tropes are common to many or all entries in the Shrek franchise.
For tropes specific to individual installments, visit their respective work pages.
Tropes used in individual movies include:

Not to be confused with Looney Toons, whose last name is pronounced "Shrek" but is spelled with a few more letters. No matter how much amusement the whole deal gave his late mother.

Retrieved from "https://allthetropes.org/w/index.php?title=Shrek&oldid=1940735"
Categories:
Cookies help us deliver our services. By using our services, you agree to our use of cookies.