Everything About Fiction You Never Wanted to Know.
Jump to navigation Jump to search
/wiki/George Lucascreator 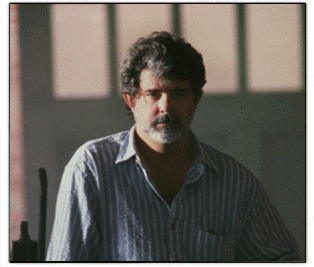 In high school, George was a car buff, and wanted to be a professional racer, until a near-fatal crash days before graduation; EMTs actually declared him dead at the scene. After recovering, he attended a community college and turned his passion to filmmaking.

His first work was Freiheit, but his best known pre-Star Wars works are THX 1138 and American Graffiti. He co-founded American Zoetrope with Francis Ford Coppola, to get away from the oppressive Hollywood studio system, and with the success of Graffiti and Star Wars, founded Lucasfilm. THX 1138 in particular is a frequent source of references, with "THX" and "1138" appearing in various forms in American Graffiti, Star Wars and the Indiana Jones films, not to mention providing the name for the THX soundsystem.

After American Graffiti, George wanted to revive the old serials' spirit, and pitched two ideas: one based on the Flash Gordon and Buck Rogers serials (Star Wars); and one based in the Republic serials with an Adventurer Archaeologist (the Indiana Jones series, produced by Lucas and directed by his friend Steven Spielberg).

To create his vision for Star Wars, George revolutionized special effects and post-production techniques. Before, the "spaceship flyby" effect was accomplished by pulling a model ship across a starfield backdrop with a string; very limiting and very cheap. George (with a LOT of help from John Dykstra) decided to leave the model static, put it against a bluescreen, and move the camera around it.

George is infamous for his iron-fisted grip on the Star Wars franchise. This may be from Warner Bros.'s Executive Meddling in THX-1138 to cut it down and reduce its marketing budget. Many fans blame the perceived faults of the series on Lucas's refusal to accept creative input from others; in other words, he's considered a great producer when he simply oversees his staff developing his general ideas such as Lawrence Kasdan who did script rewrites, but now a terrible director and writer when he tries to do that himself.

He's also infamous for writing cheesy dialogue - during the filming of A New Hope, Mark Hamill is alleged to have told him that "people don't talk like this!", Harrison Ford complained "you can type this shit, George, but you sure can't say it" and Empire co-writer Lawrence Kasdan recalled frequently saying "This is a terrible scene, I can't believe George wrote this" while reading Lucas' draft. Even Lucas called himself "the King of Wooden Dialogue".

Lucas is still indisputably a pioneer in film technology and special effects, both in his own films and through Industrial Light and Magic. He's a strong advocate for digital filmmaking, having shot the last two Star Wars prequels digitally (and turned Robert Rodriguez onto the technology), and firmly believes that digital filmmaking will lead to an increase of independent productions (at a much lower cost than studio films, due to film reel development) and be surprise successes. He predicted this in the early 90's, well before the release of District 9.

Lucas was married to film editor Marcia Lucas (formerly Griffin) between 1969 and 1983. Marcia worked as an editor for A New Hope and Return of the Jedi, participating in the production of all the three original trilogy movies. In a notable example of Creator Couple, her main contribution to the original trilogy was to serve as The Heart, balancing out Lucas' highly technical, visual-minded vision with an emphasis on character development, plot and emotional response - Mark Hamill in particular has confirmed this. Lucas' divorce from Marcia, occurring at the same time as Spielberg's divorce from Amy Irving, is cited as a leading cause for the Darker and Edgier nature of Indiana Jones and the Temple of Doom, as well as the fate of the Prequel Trilogy.

George Lucas provides examples of the following tropes:
Retrieved from "https://allthetropes.org/w/index.php?title=George_Lucas&oldid=1610837"
Categories:
Cookies help us deliver our services. By using our services, you agree to our use of cookies.