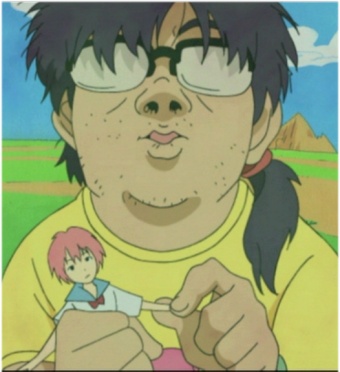 Even the inanimate doll is struggling to say "rescue me from this creature!"

Otaku come in many flavors, but one thing can be said for each and every one of them. They've each staked out their own favorite thing, and they obsess over it relentlessly. Regardless of other intelligence, an otaku will have an obsessive, unhealthy, and almost encyclopedic knowledge of their chosen topic.

There are almost as many flavors of this type of character as there are things under the sun, but a few of the major ones are:

Essentially, someone could be an otaku about just about anything: politics, sports, history, etc. When otaku is used by itself by a Westerner, 99% of the time it will mean "anime/manga otaku".

Neither Geek nor Nerd is an adequate translation. However, in modern use, both words may carry a shadow of the right connotations of obsessive interest and/or social ineptitude; see the Geek and Nerd pages for details. Think of the older, more pejorative senses of Geek and you're on the right track - the British term anorak is also a close translation. In Japan, the term Otaku does not carry a positive meaning, at all.

A semi-related term is Hikikomori, which refers to a teenager or young adult who withdraws completely from society for an extended period, typically isolating themselves within their parents' house and become psychologically fixated to particular hobbies (especially heinous to the beehive mentality of Japan); hikikomori in media are usually otaku of some sort. Hikikomori are also critically viewed as lazy and outright creepy, which doesn't help the perception of otaku much.

Otakuism is associated with men, with the notable exceptions of the Fangirls, Wrench Wench, the Cosplay Otaku Girl, and creators of a certain kind of comic. However, females seem to be either getting more common lately or becoming more relaxed about showing it.

Examples of Otaku include:

Retrieved from "https://allthetropes.org/w/index.php?title=Otaku&oldid=1924285"
Categories:
Cookies help us deliver our services. By using our services, you agree to our use of cookies.