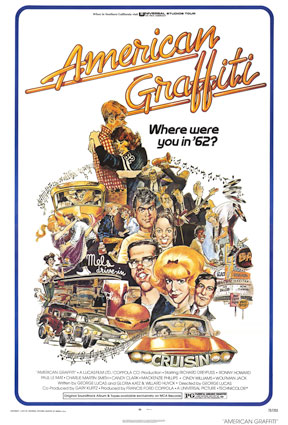 Think Dazed and Confused set in The Fifties (or pre-hippie era Sixties if you want to be technical about it.)

American Graffiti is a 1973 Coming of Age film based on director George Lucas' memories of growing up in The Fifties (actually the very early Sixties, which had much more in common with The Fifties than The Sixties) and he thus manages to cram in as much Popular History as possible. Of course, he was one of the first to do this. The film was produced by Lucas's friend and fellow filmmaker Francis Ford Coppola, who was just coming off his success with directing The Godfather. It follows a bunch of High School kids as they spend the night after their graduation goofing around, getting into trouble and contemplating their futures all while listening to Nothing but Hits. No, there really is no plot. Get over it.

The movie has a lesser-known sequel, More American Graffiti, which was set in The Sixties and supposedly "made all of ten cents".

Tropes used in American Graffiti include:
Retrieved from "https://allthetropes.org/w/index.php?title=American_Graffiti&oldid=1554812"
Categories: