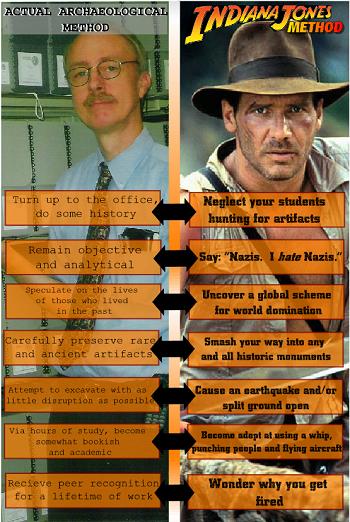 Yeah, but who would you rather be?

In Real Life, archeology is not the most fast paced of careers. It can involve a lot of research, dirt, and going over small details like diet and theorizing on them. A real archaeologist can make his career by the meticulous analysis of the contents of a garbage dump and indeed, they (well, a few) would prefer to find the dump rather than a king's tomb, since the dump can tell them far more about the way ordinary people lived, with far fewer legal and ethical ramifications. Additionally, a dump will have items of low or underestimated value, reducing the allure for tomb robbers who might have broken into tombs and ruined the information.

Not so in fiction-land. Since most of the world has the ruins of ancient and powerful civilizations littered under the surface, archeology is a career that brings one constantly face to face with Lost Technology, imprisoned evils, and MacGuffins. Lots of MacGuffins. If it takes place on Earth and the writers don't make one up, it'll usually be something like an Egyptian tomb (expect a Mummy to haunt our hero) or the Holy Grail.

In fiction, it then becomes perfectly reasonable to use any means to acquire said MacGuffins, no matter how destructive. Who cares if you have to destroy ancient machinery that could well be thousands of years old and still works? There's a gold monkey at the end! And you get to wear a dashing Adventurer Outfit!

An Adventurer Archaeologist has an interesting morality. Ruins are rarely really "abandoned" as the descendants of the Precursors, or their ghosts, or even their mystically preserved selves are very upset when outsiders intrude, and especially when they take the focal points of their culture with them.

Most people call this "theft," and in Indiana Jones and the Temple of Doom, it's noted that the title character has been called a "grave robber" (although real archaeologists were once considered that). However, to an Adventurer Archaeologist, it's okay as long as it goes into a museum. To keep the audience rooting for the Adventurer Archaeologist, he or she is often pitted against an Evil Counterpart who wants the same treasure for themselves to hoard in a private collection, or to give it to the bad guys/sell to the highest bidder, use it to Take Over the World, etc.

This trope is Older Than Radio, an accomplishment when considering that archeology is a profession less than two centuries old. Antiquarians, historians, and intellectual grave robbers were a staple of 19th Century gothic horror and ghost stories. They appeared regularly in pulp adventure novels and film adventures dating back to the dawn of talking pictures, including the Universal mummy movies and the Johnny Weismuller Tarzan films. A certain George Lucas and Steven Spielberg series made it big again in The Eighties.

It should be noted, however, that this Trope and its origins do come from Truth in err.... Literature. Early archaeologists tended to be more concerned about their own glory and getting museum trinkets that looked good than actually discovering information about ancient cultures, or preserving knowledge for future research—let alone respecting or collaborating with the modern descendants of the people whose tombs and temples they excavated. Their methods were often horrible by modern scientific standards, as the examples below show, and they usually discarded artifacts that weren't glamorous or shiny, including some types that are considered quite scientifically valuable today. As a result, no one knows how much historical evidence will never be known to us through the carelessness of 19th and early 20th century archaeologists.

Often the main character in a Jungle Opera.

Examples of Adventurer Archaeologist include:

Retrieved from "https://allthetropes.org/w/index.php?title=Adventurer_Archaeologist&oldid=1880727"
Categories:
Cookies help us deliver our services. By using our services, you agree to our use of cookies.