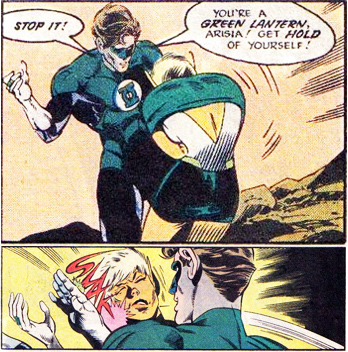 The Hero has just gone off the deep end under stress. Proving himself to be Not So Above It All, he grows increasingly hysterical, Jerkass, unresponsive or (w)angsty, at a time when his team needs his unaffected leadership the most. How do you fix the hero?

With the human-centered Percussive Maintenance, of course!

His Sidekick, Distaff Counterpart, right-hand man or woman, love interest (specially the ladies of the Tsundere or Broken Bird kind) or commander jolts him back to his senses with a sharp slap with either the front or the back of his hand, or just a straight-up punch to the face, and occasionally a retort for him to get his head out of his ass already (see entry title for the archetypal one). In anime, the phrase "Shikkari shiro!" is often heard. The shame-faced hero says something along the lines of "Thanks. I needed that." Alternately, "Not even my dad hits me!", but they still calm down.

Alternatively in a program wanting to limit the potential for imitation violence, a glass of cold water may be used to bring the subject back to their senses.

Might overlap with the Dope Slap. May also be used on a Hysterical Woman. Similar in spirit, but not so much in execution, to Don't Make Me Take My Belt Off. Compare with Quit Your Whining, in which it is verbal, but this trope can be used to "spicen" it up. If you need to lay a full-on beating to snap someone out of it, see Beat the Curse Out of Him.

The MythBusters tested a myth based on this trope and found that—at least when dealing with someone who's merely tired and frazzled rather than suffering from a more serious condition—a slap to the face does help the slapped person to focus on the task at hand and perform better. Apparently the idea is to invoke the 'fight or flight' response by temporarily boosting adrenaline and related hormones. Nevertheless, it should be applied with extreme caution, as smacking someone who's already suffering can easily do more harm than good.

For reassembling after destruction, see Pulling Themselves Together. Also not to be confused with A Date with Rosie Palms.

Examples of Get a Hold of Yourself, Man! are listed on these subpages:
Retrieved from "https://allthetropes.org/w/index.php?title=Get_a_Hold_of_Yourself,_Man!&oldid=1774841"
Categories:
Cookies help us deliver our services. By using our services, you agree to our use of cookies.