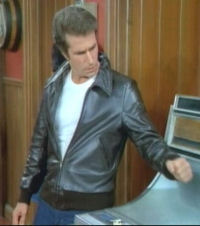 Bringing a malfunctioning piece of equipment back on-line by giving it a good bash.

Also known as "Technical Tap", "Ape Mechanics," "The Fonzarelli Fix", "Spike Spiegel School Of Repair", or "Emergency Repair Procedure #1." This is a case of Truth in Television, as many people will often do this with malfunctioning machinery—with mixed results. In real life, it works best (where it works at all) when dealing with machines with moving parts capable of being physically jammed or temporarily impeded (gears or switches), hydraulic systems suffering particular kinds of plugs or clogs (fuel lines or sump pumps), or internal components whose function depends on precise alignment and which have become misaligned somehow (vacuum tubes, early transistors, and connection interfaces) -- all hallmarks of pulp-era storytelling where technology was still a hands-on art. Realistically, it is almost impossible to work with modern delicate electronics or futuristic solid-state circuitry/machinery (cf. Drake's camera-bash from Aliens, below), but the appeal of a highly emotive and easy-to-show repair technique often wins out over boring technical accuracy.

In other words, Don't Try This At Home. Repeatedly whacking your DVD player is highly unlikely to make the picture any clearer, although it may still make you feel better.[1] Soon-to-be-extinct exception: CRT screens (apply fist to casing, not glass).

It could be argued that this might be a rare example of both Truth in Television and Reality Is Unrealistic. Might be justified if the character uses Machine Empathy to determine where to strike.

A common variation involves a character, having tried every method they can think of to get something to work and after working for hours with no success, hits the malfunctioning device solely for the purpose of Percussive Therapy, only for the device to respond to the Percussive Maintenance and start working again.

Compare Percussive Therapy where a character does this solely for their own emotional benefit, rather than the proper functioning of whatever they're hitting. For use on life forms, see the Dope Slap, Get a Hold of Yourself, Man!, Spank the Cutie or Don't Make Me Take My Belt Off.

Examples of Percussive Maintenance include:

Retrieved from "https://allthetropes.org/w/index.php?title=Percussive_Maintenance&oldid=1961194"
Categories:
Cookies help us deliver our services. By using our services, you agree to our use of cookies.